Just seen on the shelf in sainsbo’s….. WTF? 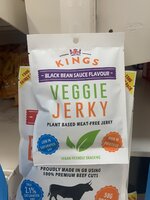 Supporter
Daughter had some , I tried it and spat it out, like a piece of salty rubber.
G

Supporter
Cows eat grass….. Veggie based is a true description…… don’t like the sex or colour of the cow…. Can feel a protest coming on there

I just don't get it either ?

FrenchieBoy said:
Am I being thick!

Thanks! It must be an age related thing!

@CarlW Something to be righteously indignant about?
E

Supporter
I've seen on Asda jollof rice made in India!

I am having a veggie free burger for supper tonight...

I've just had a look at the ingredients, oh yum

Supporter
Tonight's Garlic chicken definitely had no vegans in it

Wouldn't dream of it! My laughter is meant as empathy as I do similar things on a daily basis

Supporter
My goat curry and roti was spot on tonight. I hope the kid was a vegetarian.

My best mate who I’ve known since nursery school also lives here. He and I have been side-by-side through thick and thin for 50 years. He’s a vegan. So is his bonkers wife.

Staying with them is an exercise in extreme hilarity. When we go stay, we always pack two chilly bins, full of our own food. Including our own pan (not allowed to cook meat in Bonkers Wife’s). Once bitten, forever shy - never again will Bonkers Wife cook for us. That was one of only two meals that I’ve ever been served that merited just one bite. The other was donkey gristle in Tanzania.

You would not believe what’s in their larder. Christ knows how much money they spend on highly processed weird arse “you couldn’t make it up” vegan food in plastic packets, there’s stuff in the back of the cupboard that must be 10 years old. And it’s incredibly expensive! Thanks for the tip though @deerstalker.308, that “jerky” is gonna be my mate’s birthday present!

The wife of colleague of mine went through some weird vegan phase last year. The tales he told of vegan 'cheese' (called 'flavour block', apparently?) actually made my stomach churn

Woodsmoke said:
Wouldn't dream of it! My laughter is meant as empathy as I do similar things on a daily basis
Click to expand...

tozzybum said:
Tonight's Garlic chicken definitely had no vegans in it

eating vegans will give you tapeworms if you not careful when they apparently. they chew loads of wet grass before settling down for the night and flactulating and have already saved the planet
F

Goingback said:
Cows eat grass….. Veggie based is a true description…… don’t like the sex or colour of the cow…. Can feel a protest coming on there
Click to expand...

My doctor says his vegetarian and vegan patients' ear wax is runny. He didn't know if it was significant, but he said he can always tell a meat-eater from a non-meat-eater. That, and he said vegetarians and vegans have more health problems and are more prone to hypochondria. So he said.
You must log in or register to reply here.
Share:
Facebook Twitter Reddit Pinterest Tumblr WhatsApp Email Share Link