Couple of bucks taken by my Son and I last night in the wilds of Galloway.

First one spotted at just shy of 600m, was a long midge infested stalk in to it. As we closed the gap to 180m he decided to lye down in the heather.

Eventually after whistling, shouting and howling like a wolf we got him to stand. Hopefully there weren't any hillwalkers within earshot

My Son dropping him cleanly with the 6.5 Creedmoor in the engine room.

Quite an odd head on him, with seven tiny points.

Quick gralloch, walk back to get the ATV and got him extracted back to the track.

Applied copious amounts of midge repellent, had a drink then off again.
A short time later we bump a bonny doe. After watching in the binoculars, we notice she has two kids at foot. Should have taken a photo.

The grass is getting pretty long now but whilst glassing my Son spots what he initially believes to be a hare, but soon realises it a pair of red ears with 6 points in the middle.

I get the bipod set up, the magnification turned up a bit on the scope and ready myself.

Sure enough the wind has changed slightly and he gets a whiff of our bodily cologne.

Up he gets, looking straight at us but it's lights out at 230m with the Creedmoor delivering a fatal body blow to the heart.

Hopefully get out next week again if the weather is decent.


Not the biggest bucks in Galloway but great night out with the boy nevertheless. 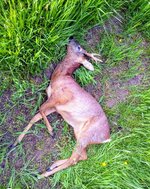