I recently bought some Fox non lead factory 130’s for my 7mm08 and after testing it at the range shot a roebuck a couple of days ago. This is the first deer I’ve ever shot with non lead ammo.

Deer was partly obscured by long grass so could only see top of shoulder, hence shot placement. Bullet entered just behind left shoulder and exited top of right shoulder. Deer approx 70 yards and dropped where it stood, (bullet had clipped/touched the spine as it passed through top of shoulders).

On examination after skinning it is apparent that the bullet did more damage on the way in than on the way out. From outside the entry and exit holes look the same size, but from inside there is a bigger hole and more damage to the ribs at the entry than the exit. The lungs were extensively damaged with plenty of blood as would be expected, so a quick, humane death.

I know it’s not possible to draw any conclusions from just one deer, but what I can say for sure is that there is huge difference in meat damage (lack of) when compared to the lead ammo I’ve been using. The right side shoulder would have had a much bigger hole and more bruising/trauma with my normal lead ammo. And the other thing is the price of course! 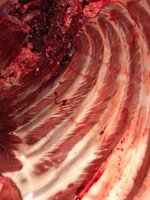 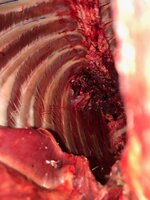 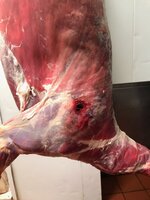 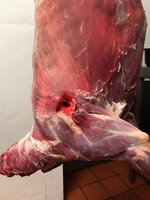 Exactly what I’ve been finding with the Fox 130’s from my 308. Small neat entry / exit but immense h/l damage. I dare say your roe dropped instantly from clipping the spine, but of the few animals I’ve shot which have run they’ve only made a few yards. Very early days for me with Fox factory but looking good.
W

Early days for me also with Fox 130 in my 7mm-08. It was superbly accurate on the range. I had heard terminal performance is good, but have yet to see it for myself. Very interesting account - many thanks for sharing.