Indy is a four year old German Shepherd. She's originally from Holland and is trained in Schutzhund. At the moment she belongs to the Thames Valley police as a brood bitch, I'm looking after her until after her next litter then she gets signed over to me. 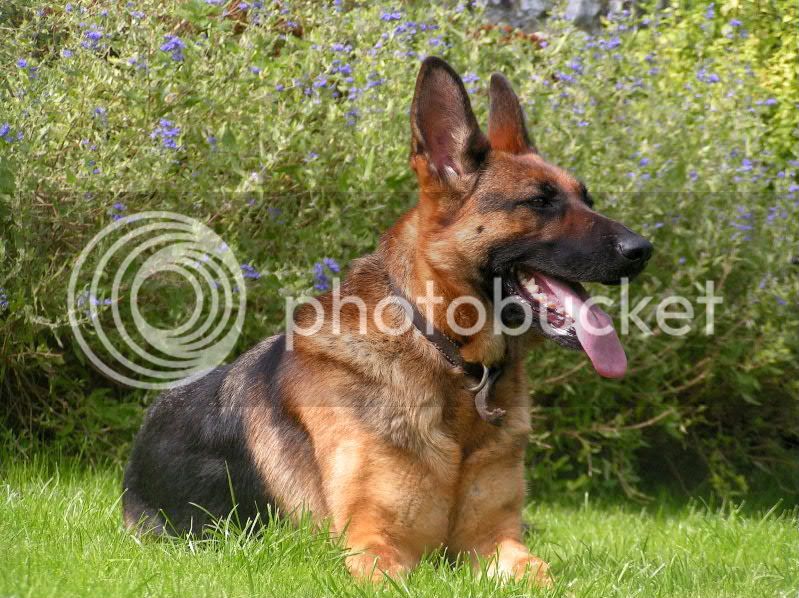 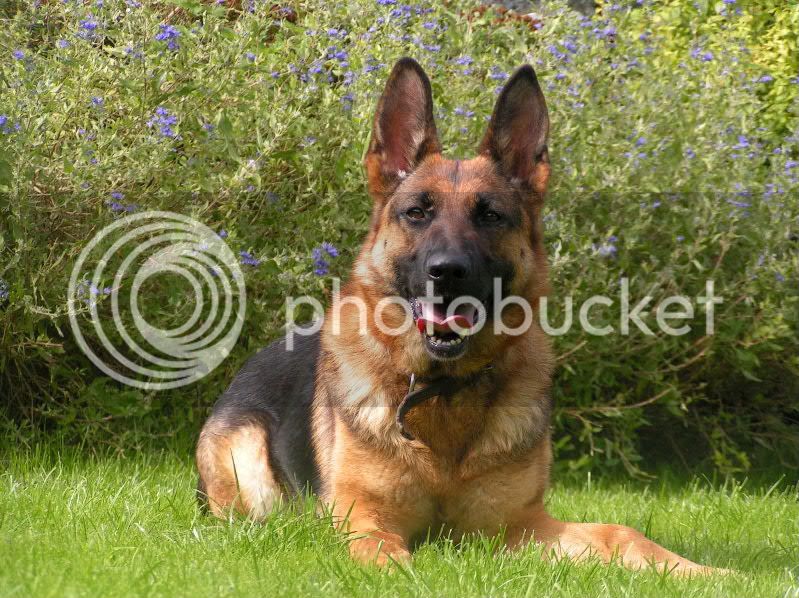 I'm using her as a security dog and also to train her to track deer. I started of going back to basics as she really needed it! I then read up on Schutzhund training so I could get a bit of her back ground training.
I can't say it's been easy,she's willful and has nailed three of my other dogs but now she seems to have calmed down, thank god!!

I started her off by putting blood under one of three flower pots and praising her and rewarding her with her ball when she chose correctly, which was 99% of the time.
This became to easy so I then used a bit of one inch diameter dowel and dipped it in some deer's blood, I then buried three of them just under the surface in my training field, she found all three in no time at all, again it was all to easy, I pondered this for a while until I realized she was following my scent to the buried dowel.

After reading a comment by Jagare on here, I then used a deer's leg and tied it behind my Landrover and laid a fifty yard trail, I put her on a lead and told her to "find" twenty seconds later she's found it. I then laid another trail two hundred yards long and put a bend on the end, she followed it exactly, I praised her and then gave her reward. I did the same again yesterday but put a few twists and turns in the trail, again she followed the scent faultlessly but actually over ran the leg.

I have no doubt that she will track deer, but any advice on what to watch out for or what to do next are most welcome.

I have trained working dogs for twenty five years but I'm a novice at this, but loving every moment of it. My actual aim is to have a bitch from her litter and train a deer dog from scratch.
This is the pack, the Shepherd in this photo isn't Indy. 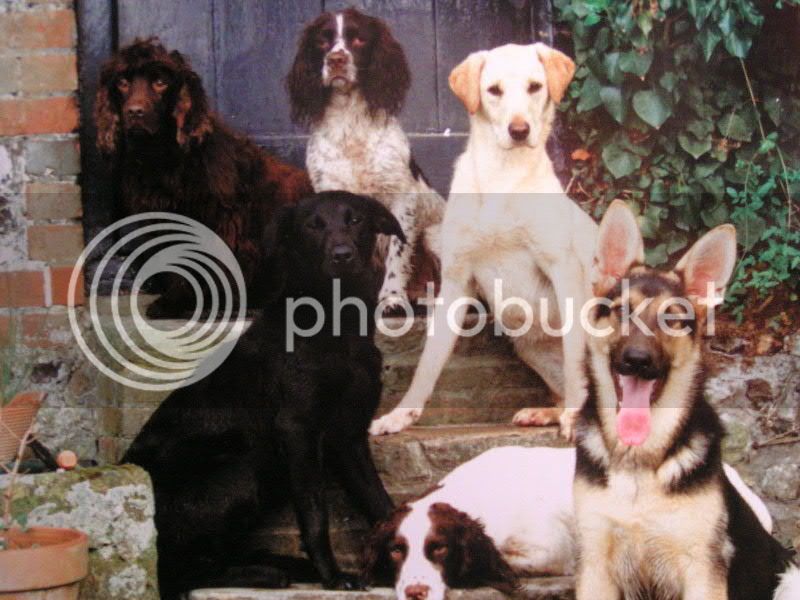 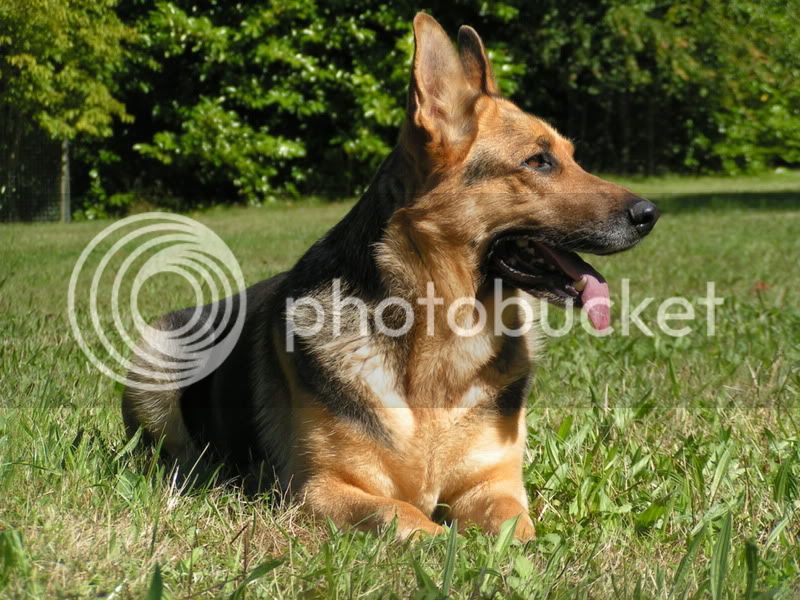 Supporter
Elwood
i hav been thinking about this bitch since you mentioned about coming on the dog day, what a great idea
one person i would recommend speaking to on this site is Jagare
his O/H Helena has trained sheperds for tracking purposes, don't think you will go wrong with their advice, thats for sure
ATB
stone
E

Thanks Stone, hopefully Jagare will offer some advice when/if he reads this.

Took her out today and she followed a 400 yard trial faultlessly. Due to the distance I made it easier for her by working her into the wind. I'm now wondering if this is a good thing or not as her nose came of the ground for the last fifty or so yards and possibly followed it in visually.

Site Staff
Trade Member
German Shepherds can make good deer dogs, I have had two in the past, although only as house dogs as a rule. However the last one I had was very good at flushing anything, and had a terrific nose on him, although for deer stalking purposes he was the wrong colour (pure white) and that is why I did not train him for stalking.
S

Elwood said:
Thanks Stone, hopefully Jagare will offer some advice when/if he reads this.

Took her out today and she followed a 400 yard trial faultlessly. Due to the distance I made it easier for her by working her into the wind. I'm now wondering if this is a good thing or not as her nose came of the ground for the last fifty or so yards and possibly followed it in visually.
Click to expand...

what my thoughts on this are is she worked 350 yards with her nose down
the last bit was due to the greater air scent about and all dogs will follow that than a few traces of blood, think of a pheasant and how a dog air scents that , then times it by the size of the deer you are looking for
if fresh how much scent is that
nothing to worry about to much but how old was the blood scent before you started to trail it

I lay the trails pulling the deer hoof with a 3mtr peice of string. leave the Landy in the garage. My stalking mate ,dog hound uses a pair of shoes where you can fix the hooves to the back with clamps and lay out the trail like that. You can use a pair of rubber boots that have been well washed and kept out of the house. store said boots in a plastic bag and only use for laying trails for the dog. You can also have some thing like a boiler suit kept the same as the boots that you put on only when laying trails. It is a problem with dog that are trained to track human scent as they don't just follow scent from your feet but also any other scent like sweat, skin cells and any thing else your body sheds. Once the dog is following a deer trail make them progressivly harder with less blood and longer time between laying and tracking. I think once you get up to tracking a 8 hour scent. the dog will just be on the deer scent. Don't rush the training .
P

These are the shoes you require, they can be stored in the freezer with the cleaves attached. These are about the most realistic way you can lay a scent trail and as soon as you start using aged tracks, they should be clear of your scent, human scent degrades quicker. It also stops leaving parallel tracks even on short time trails or at least goes some way to eliminate it, you will always get a certain amount of human airbourne particles on a new track.

Jagare, when laying a blood trail how far apart do you lay the blood? baring in mind Indy is new to blood scent, but far from being a novice a dog when it comes to tracking and all ready shows great interest in blood.
N

I have had two german shepherds, they are excellent dogs. Strong, easily trained, very disciplined, good natured, full of character and loyal to the family! Can be a little nervous, and they have their health concerns as do most breeds - hips and heart in my case but nothing too serious.

They have laser guided hearing, for fun mine could both hear mice running around through the grass and chase and catch them by hearing alone. Great for flushing (rabbits at the time). She'll be an excellent working dog. Her ears will point the way to the deer.

Great looking bitch by the way, I love the expression they have and that HUGE pink tongue which does nothing else but loll about idiotically! How could you not love a face like that

I start with a good blood trail when i start training. squirt a good bit at the start and then a drop every 6". I water the blood down 50-50 with water and use a washing up liquid bottle. with a bit of practise with your finger over the spout its easy to lay the amount of blood you want.
Once the dog will follow the trail reduce the amount of blood.
In tracking field trials they use a third litre of blood over 600 mtrs.
I use a lot less than that. I like to make the dog work .
I went on a course a few years ago run by a tracking trial judge who was a believer in useing no blood at all, just dragging a hoof for training.
You must log in or register to reply here.
Share:
Facebook Twitter Reddit Pinterest Tumblr WhatsApp Email Share Link