a Land Rover in one of the banner adverts. So who drives one and which model?

I have a 1998 Range Rover 4.6V8 Autobiography. slightly modified

Supporter
I work on the bloody things all day and the missis drives a freelander. Me and a mate have a series 3 for a shooting wagon Ideal for bench resting foxes at night.
Jonathon
R

I have one but don’t get me started on the subject. Suffice to say it replaced a very reliable diesel version but the current one a 2000 4.0V8 ES Discovery running on (OR RATHER NOT RUNNING) on LPG has had about 5,000 spent on it in the last 3 years and it still refuses to play ball.

Supporter
They don't like gas. I have not seen a decent kit yet for one. If the manufactures dont fit them as a opption from new then it's for a reason. Seen a P38 blown up like a bomb, they cuold only tell from the pictures it was a range rover was by the one wheel left on it
Jonathon
V

remmy7 said:
I have one but don’t get me started on the subject. Suffice to say it replaced a very reliable diesel version but the current one a 2000 4.0V8 ES Discovery running on (OR RATHER NOT RUNNING) on LPG has had about 5,000 spent on it in the last 3 years and it still refuses to play ball.

Could that not have been spent on petrol instead?
Personally I find them very reliable. There is the odd problem now and then,
but even me as a hobby mechanic can still fix my RR. You just have to get to
know the vehicle and get your hands dirty, rather than handing it over to the
stealer every time there is a niggle. I havn't had any other make of vehicle for
the last 11 years.
R

I have to that whilst I have heard it said about the gas thing its not running on petrol either but it has proved to be every bit as reliable on the gas system (or should I say unreliable on either system) It has a Bigas multipoint injection system, and once recorded a refill to refill mileage on a stalking trip up north of 19.4 MPG on gas. As a local lpg installer once told me there is almost nothing that can go wrong with the gas installation as it really doesnt have many components. The problem I have is trying to get the B****y thing not to run too rich regardless of fuel used. All sensors feeding the engine management unit have been replaced many times over along with every other sensor from CSPS to knock sensors with no joy. It doesnt matter if I run it on petrol and leave the LPG switched off after sensor replacement, after a few hundred miles it begins to coke up again. I am at my witts end with the B thing but as I said "dont get me started"
What I would say however is that whilst three garages have tried and failed I would welcome your experienced opinion or suggestions (save anything involving fire as the last one went that way but thats another story)

There is no point putting petrol in a motor that doesn’t move the money has mostly been for parts everything from steering boxes to suspension pumps and alternators. I do most of the work myself and can probably do it blindfolded by now(although my mate has the diagnostics software which is required after most jobs and the last engine rebuild was done by him) I know the disco inside and out as I have lived with them for years and could probably diagnose/fix problems better than some dealerships. As far as reliability is concerned at least a dozen of my stalking buddies have now turned their back on the Brand I however have persevered much to their disbelief. If I could just get it to stop running rich I would be a happy man ( I have even considered wiring in a device supplied by RPI engineering that can alter the ignition timing and change the injector settings but I havent heard any reports on it and I shouldnt have to)

Supporter
It might be an air flow meter problem if it is coking up it may not know how miuch air is going into the manifold so it can't adapt the fueling?
Are the oxygen sensors working ok?
will have a look for any bullitins at work tomorrow
Jonathon
R

I would appreciate that. I have replaced airflow meters (backfires have ruined four of them now) and lambda sensors have been replaced although the last diagnostics check showed the one on the left hand bank slightly out so they will both be replaced again soon. What I cannot understand is that if all the sensors are functioning correctly including TPS etc then why cant the ECU adjust the timming appropriately could it just be that the ECU settings themselves are out(although we have reprogrammed it on numerous occasions now). Anyway as I said I would appreciate any inside info you might get.

Supporter
The backfiring might be down to the gas all the ones we have had in do it. Has the air box got a pop off valve in it this will stop it buggering up the air flow meters.
Have you tried an ignition module?
Is the fuel regulator ok if it's not there could be to much fuel pressure in the fuel rail.
Have you tried disconnecting the gas completly ie all electrical and mechcanical parts.
Jonathon
S

My first car was a Land Rover - an old ex AA with a reg plate starting POO, so we called it big yellow POO. I was to young and stupid to realise how much of a death trap it was.

Since then i've always had a Landie of one sort ot another - series 2, series 3, 90,101, 110, Disco and the last was a 130 Rapier with an LPG conversion. There was always one for fishing and shooting.

When i think of the many, many hours i've spent under them just trying to keep them working and constantly repairing the countless faults.....

About 2 years ago and after spending a week under the rapier in miserable conditions i decided i'd had enough and traded it in for a Mitsubishi Pajero. Oh joy, a real working heater in the winter and real air conditioning in the summer. A reliable bus that hasn't let me down - ever! I've never looked back and will never have another Land Rover. I've since converted friends and family over to land cruisers, troopers and pajeros.

It's every bit as capable off road, much more comfortable on road and i no longer carry half a garage in the back for the numerous occassions in which the Landie will let you down.
S

I've had 3 Range Rovers when I lived in the UK and they were all great vehicles. One of them had a gas conversion fitted by Frogs Island 4x4 and it was absolutely perfect.......... I guess I should never have sold it.

Then I bought a Disco here in SA and it was the biggest piece of crap I've ever owned and after that one, I'll never buy another one. My current (fun) vehicle is a restored 1980 Jeep Wagoneer with an AMC 304 V8 engine and that's 10 times more reliable and 10 times easier to work on than that damn Disco ever was!
L

I have an old 3.9 V8 classic shape uprated springs, poly bushed, battered and bruised, bit smelly inside from all the things we haved chucked in it but runs like a train, just MOT'ed it and it flew through, it's gassed up runs fine on either lpg or petrol, my mate has a Disco on gas also being German he calls it the landrover Auswitch Model ..

It's aslo for sale if anyone wants a cheap hunting vehicle, at 600 quid it's a bargain compared to spending £5k on a new un that won'twork and missus starts crying if you chuck bambi's mum and dad in tha back

I don't think you get them over there but here in Africa we have a Toyota Landcruiser pick up that's simply incredible. Our diesel version has a 4.2 straight 6 engine that's unburstable and the Aussie version is even better with a V8 diesel engine. - They're a helluva price though.
M

Hi
I bought an ex mod series 3 2.25 petrol with the intention of using it as a shooting tool but it spent 9 months on the drive and a week on ebay...!Next time I'll get one with an mot!(and registration etc)
MARK

Drive a 90 XS Td5, Always had defenders & always will, a very battered ex Camel trophy 110 with quarter million miles on the clock that was still running all its original running gear, an IBEX (That was fun) a couple of 90s 200 & 300 tdi and a couple of original world war 2 jeeps (1944 willys MB & 1942 ford GPW) Great vehicles for lamping with the screen folded down 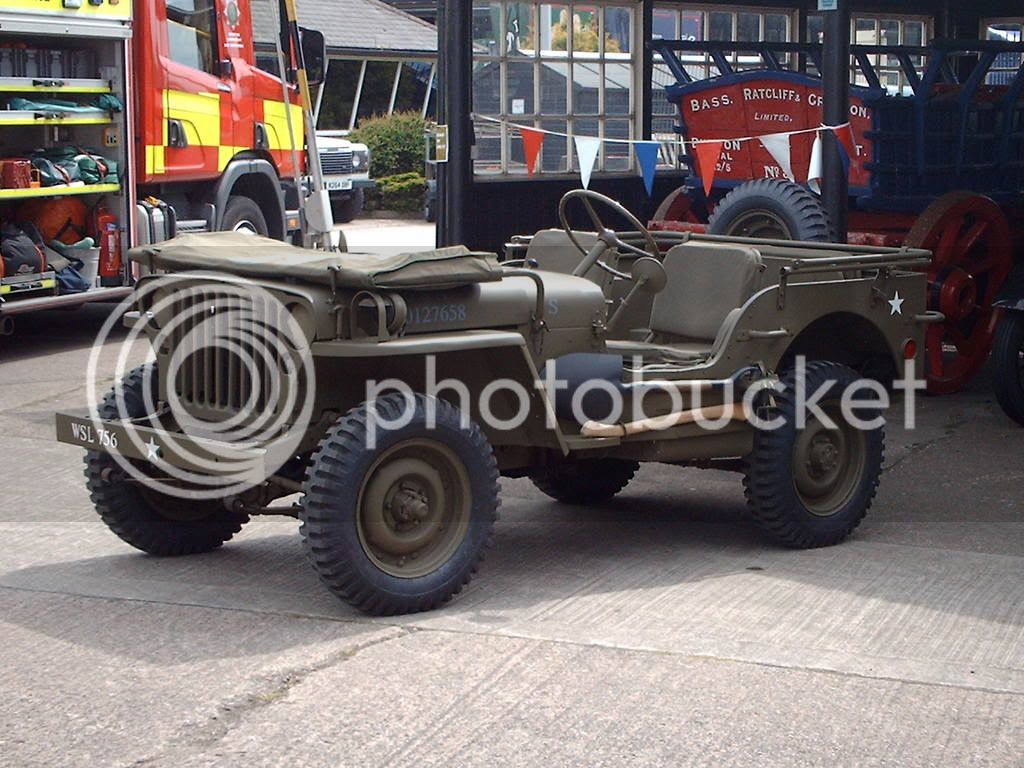 I have a freelander 1.9 petrol 2004. I think it's great, does family, motorway, deer, building extensions, logs, trips to the skip.

I'm thinking about getting a rusty jimny or old small suzuki to leave in the woods, notify it as SORN - not tax or MOT needed. I want a workshorse to pull logs out, move rocks around etc. 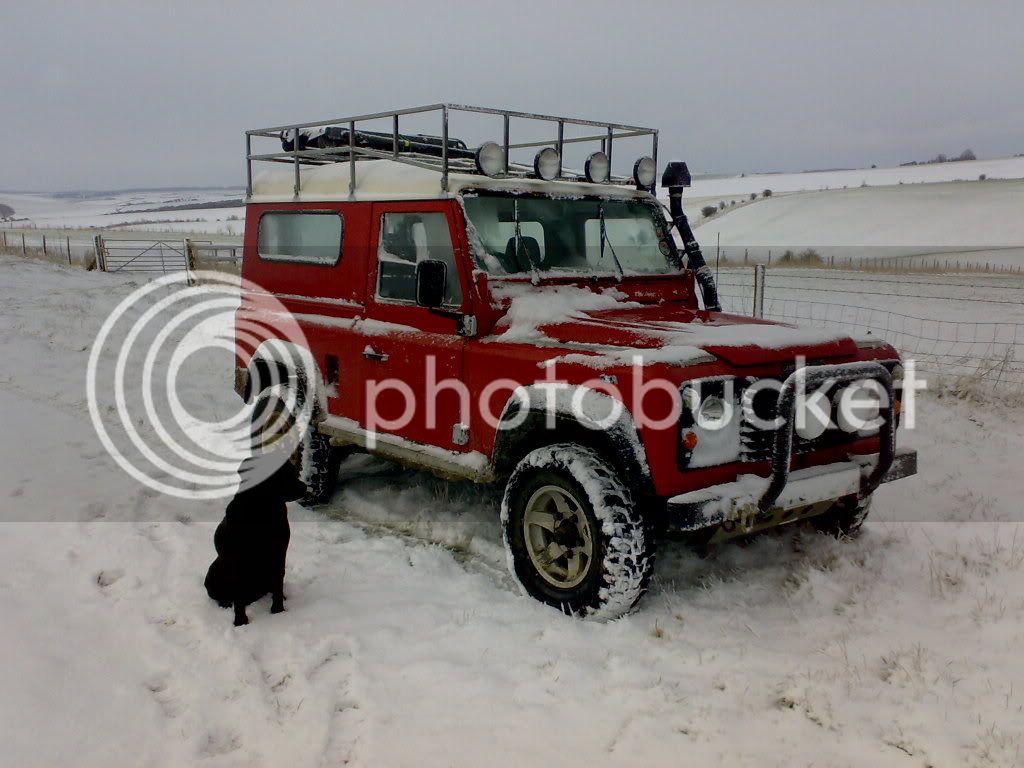 highseat on roof, oil ****ing out of swivel joint.