So I felt it was time. I've got him walking fairly reliably to heel now and the chasing anything that moves is under control so I thought it was probably time to take him on his first outing. Max is a GWP, just turned 10 months. He has the ability to be a complete dick head but he also has huge potential that I really want to tap. Many might say that 10 months is too early, but I had my HWV out at that age and whilst it was a pain for the first few outings he soon got the hang of what we were up to. He's tracked 9 or 10 deer that I have shot, dragged 100m and then got him out of the truck to find but he has never stalked with me before.

I parked the car up a few hundred meters from where I thought we would probably end up and we walked a mile or so back down the bridlepath to get the wind right for us. Max was staying behind my sticks most of the time, from time to time getting a bit brave but getting put back in his place pretty swiftly. No action for the first 1000m and then a doe 100m in front of us and looking through the bins a kid that had been left in the long grass the other side of the little valley we were going into. Dog didn't bark at the doe so a good start. She wandered off and we wandered on. Another couple of does spotted but no bucks out to play.

We stood up at the top of the next valley and waited. We had woodland around us, 100m to the tree belt at the bottom and clear sight of the other side which had a woodland edge 200m away. Another three does put an appearance in, one of them only 60m away. Again, nothing from the dog who had gone into dick head mode, bored and rolling about on the floor when he wasn't getting a bollocking from me. The doe eventually got bored of our behaviour and wandered off.

Finally a buck appeared the other side of the valley. 180m but a clear prone shot. Down on the ground and the dog wanted to join in. A little chat and he lay down for long enough for me to get a shot off. The dog all of a sudden gets very serious. The buck runs for the woodland edge which Max sees and stays solidly in position. Buck disappears into the woods but I know we will find him dead, somewhere. Just depends how well those copper bullets behaved...

Max all harnessed up we walk to the shot site but find no evidence. No blood, no pins, but the pup knows exactly where he was and where he's gone. He picked up the trail and wanted to go through the hedge at the point which I know the buck entered. I can't get through there with him so I let him go. He's off on the trail. I found another entry point and called the dog. He came bounding back through the woods to me, turned and went back in again. I followed and he lead me to the fallen buck 30m in. I would have struggled for some time to find him without the pup, who has possibly graduated now from "dick head" to "quite useful at times".

The bullet had gone where it was told to but had gone between ribs in and out leaving a calibre sized exit. The bullet had not expanded well despite an impact velocity of about 2600fps. Hence no trail I could see. The first time I had seen an LRX do that. Yew Tree next up.

Lots of work to do on walking to heel and sit and stay when the action is on but we are getting there. We will be out every week together now, I'm sure he will sod up a few stalks but he's quite fun to have about. 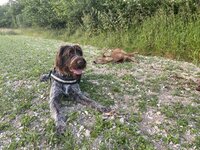 Yes, nice write up and good result with the buck and the dog!

I’ve run into bullets not expanding as well… shot a wolf with a 300 win mag at about 50 yards away. Slipped through ribs on both sides, small holes. Happened to a bear as well. Still kills things just fine, just not as much trauma.
R

Good to see someone else who takes pups with them from young age. All they learn in kennels is how to sleep. They will make mistakes but sooner rather than later the penny will drop. Well done, good results for your hard work.

My pup is now seven years old, and we still have words quite regularly. She has a lot of “go” in her, which I like, but at times wish she would bring her laziness at home out into the woods.

And she has the ability to point deer, and will keep looking at me “saying look there is a deer now shoot it” - she has n’t worked out that not all deer need shooting.

She is also good at putting up birds, will retrieve duck, but leaves phaesants for labs and spaniels.

She is a double pedigree lab cross BMH - which in her eyes gives her a superior attitude. To everyone else she is just an adorable mutt.

Not sure my GWP pup at almost a year old is ready to walk calmly stalking with me yet.
Sure we would find The deer but unlikely I’d even get a shot off with here pulling and dicking about

Trade Member
My GWP was stalking by my side off the lead at 6 months. He's out most days and is great fun to be with. He's 4 now and bar 2 or 3 instances last season of him rushing in after the shot been great fun to be out with. Their prey drive is remarkable so keep drilling the basics even when you think you've cracked it.
You must log in or register to reply here.
Share:
Facebook Twitter Reddit Pinterest Tumblr WhatsApp Email Share Link