My reloading or Case fault

Hi Guys,
Just been out for some load testing with the 6.5x47, have had no problems up to today, I was trying a couple of loads and noticed there was quite a bit of sooting in the extractor groove on a couple of the cartridges, there was also a lot on the bolt face. There are no pressure signs on any of the cartridges otherwise and out of 15 fired it was just three, one with light sooting and the two (on right of piccy) with a lot of sooting. the rest were perfectly ok (two on left of piccy) I am using brand new, Full length resized Lapua brass. I had to junk 8 cartridges to start with as necks were badly damaged, sent details to Lapua who said they would look into it but have never got back to me.
Could it be a faulty batch of cases or am I doing something wrong.

Would be grateful for your views on this please. 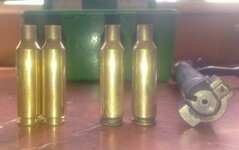 Have no experience or real knowledge of that cartridge so don't know what is considered normal loading pressures but it would appear to me to be lack of case expansion in the chamber allowing the gas to blow past.

Cannot see any cracks in the case to allow gas escape so it seems to be blowing by the case neck and wall.
S

see it shoot it

where di your load data come from as I have just ran your numbers on quickload and your miles to low on powder hence your problem with the cases not blowing to the chamber wall,so yes it is your fault,wehats wrong with the case you say has been binned ??
PM me if you need help with it
Last edited: Sep 1, 2013

Data from the Lapua site. I have a 22" 1:8 Pacnor Super Match Barrel, my Gunsmith gave me a brew he uses which was 34gr, I started at 32gr to be on the safe side but when I got to 33.2gr the bolt was getting stiff to open and although there are no other pressure signs I assumed the tight bolt on opening was a pressure sign.
There are two sets of data on the Lapua website:
Lapua 100gr FMJ - Min load 29.5gr Max Load 34.0gr.
Lapua 100gr Scenar - Min Load 34.0gr Max Load 35.6gr
One puts me on the higher side, the other too low. The bolt stiffness was the reason I stopped going higher. I have put 50 odd rounds through it with no case problems at all, sooting etc.
What do you think the bolt stiffness at the higher load is ?

Damaged cases out of the box, two had damaged shoulders (Not shown) Was unimpressed at £1.20 a pop

Maybe a little oil or cleaning fluid left in the chamber stopping the case properly sealing against the chamber wall ???
Just a suggestion.

Supporter
A mate has just had my diagnosis of lack of load pressure confirmed, by a more eminent person, sooty necks etc, He was using some Krag load info for his rifle.

Reloading data is only a guide. As they didn't have your rifle to hand it can only be a guide. If I used the max load given on one publication for a rifle cartridge I own it results in protruding primers due to too little pressure. I have to load several grains above their data to get proper case expansion in this particular combination.

A lot of people seem to forget that bullet seating depth also effect pressures. Seating the bullet out will of increase the case capacity and so reduce the pressure. Seating deep has the opposite effect.

Just as an aside to my earlier comment about the damaged Cases. I got in touch with Lapua after hearing nothing about the faulty cases for a few months, I was dealing with a guy called Joerg, he was most apologetic, he had been sent the case report but had not forwarded it to me. As a result of this I have just received 200 new 6.5x47 cases from them, via Viking Arms, now that's what I call good customer service.

I'd be sceptic of the Lapua load on the 100gr bullets.

If you're loading any longer than SAAMI it drops the pressure even more.
The reason you get it on some cases, not others, may be a sign of inconsistent neck tension.

Get Quickload, measure your COAL as it will have a significant bearing on case/chamber pressure & then work your own load up - looks like the case is not obturating due to insufficient pressure on ignition.
S

Mutley said:
I had to junk 8 cartridges to start with as necks were badly damaged, sent details to Lapua who said they would look into it but have never got back to me.
/QUOTE]

interesting..... I run a 6x47 and have sent the last two boxes of new brass back due to damaged necks. Lapua need to pull their socks up a bit. Purchasing a product at that price should entitle us to the very best quality....
Click to expand...

I ended up junking 20 odd in total, the others had dints in the top of the neck that were too big to trim out and keep a decent length. Fair play to Lapua though for the 200 replacements which are all perfect. Although it seemed that the letting by was my fault, the new ones, the same length and load have let nothing by at all, either way I am happy now and making great progress with the reloading.

lack of obturation. there's not enough pressure in your load to swell the brass out to seal the case in the chamber. try upping your load a bit.....


Your problem is or might be low pressure.
The cases are not fully Obturating and sealing to the chamber wall. This causing a gas blowback and sooting the case. You may even be getting gas leaking out around the primers. Are you getting a sticky bolt this is likely caused by soot in the chamber.
This may be caused by too slow a powder, too little of a powder or too light a bullet for the powder or all three.
might be wrong but try a factory round and see it it happens again .

OK guys, thanks but read the thread, I don't have anymore problems using the new brass sent from Lapua, even when using the lower loads that I used on the first set of brass that was giving me, ALL IS OK NOW, Thanks.
You must log in or register to reply here.
Share:
Facebook Twitter Reddit Pinterest Tumblr WhatsApp Email Share Link