Couldn't help notice he failed miserably to address the issue of leaks beneath the vehicle but nailed the less than perfect in-cab heating provision of the standard offering.

Supporter
might not be improved reliability... but it cant be worse!

Supporter
Where is the socket for the red flag?

Supporter
Satanism in its worst mrs b Johnson will hunt him down and burn him in the wicker man ,ironically

Mablethorpe sea front train is a laddy with a train body sitting on top.

What a clever old bloke.

Reminds me of the Pritchard Falcon in Melbourne.

That’s my 70-year-old skiing mate, Frank Rothwell, who rowed the Atlantic single-handedly last Christmas and raised GBP 1.1 million for Alzheimer’s research along the way! A fantastic, larger-than-life character, who’s always coming up with another plan or challenge. With his Defender’s propulsion (steam) finally solved, I’ll ask him about the leaks next time I see him.

Whilst on the subject: on a recent trip to Milan, I came across a couple of soldiers in full camouflage battle dress guarding a building. I was surprised that they had obviously arrived in the Defender parked nearby. Here’s a photo of the vehicle (ex-soldiers). It was only afterwards, that I noticed something conspicuous placed under the vehicle... it soon dawned that Milan’s roads authority was sick-and-tired of cleaning up after the Guardia di Finanza 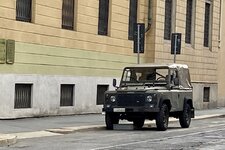