A bloke contacted me online with some deer questions about 20 odd years ago and we ended up hunting together quite a few times which was a problem as he lived an 18 hour drive away.
We eventually had some good hunts and a phone call at least once a week with emails in between and then one morning during a phone call we had a disagreement and all contact was lost.
Only last week the below photo surfaced from among the huge amount of assorted shcite on my desk. as it unfolded it was a little uncanny.
I had shot the boar one evening with old mate at Nundle NSW. I actually didnt go over the creek to view it as wild boar scalps were plenty for me. On that station pigs were shot on sight being vermin.
I had to get back home next day and old mate stayed on for a few more days and then emailed the photo that he had taken saying " that`s a good boar mate,I went over to it and took a pic for you,he`s bigger than you reckon"

Any old how the photo surfaced on my desk and a day later I read a ref to old mates name and read on further to read where he had died two years ago,strange how these things happen eh!
I shot the boar with my 7mm mag and obv its not my rifle in the pic. (pic of a pic)

I suppose the moral is that being good mates one should stay that way even if opinions differ at times. 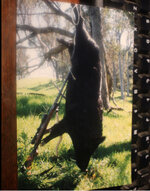 Supporter
I am sorry you and your pal had a fall out.

These fall outs are typically over nothing. When you get to a certain age, (I think most of us on SD are heading that way), there is a decent prospect that one of you could die before matters are put right.

I have a simple test. If (fill in name here) died today, would I have any regrets about having said/not said, anything to them?

If the answer is "Yes", then I take my pride, chuck it out of the window and make a phone call/send an email/send a letter/send a bottle.

I think if we're honest there's a good few of us on here that have said and done things in their past that they wish they could take back. All part of the learning curve and growing up I guess
J

I lost my best friend a few weeks back, we had never had a crossed word in the 31 years we had been friends he was a superb deer manager having been in charge of the fallow herd at Markham park for 20 years .
He always had advice and help for anyone and most of all he was a gentle man.
Rest in peace Roger Jackie and me and all your friends in somerset miss you.
K

Yeh, missing people is not nice…….ask any sniper.
Ken.
G