I have a Hunting Genset that's no longer chucking out volts (I suspect it's the voltage regulator that's gone west, but that's by-the-by) The unit's powered by a Perkins LD 33674 diesel engine, and I'm wondering if anyone has any idea as to the potential value if I were to sell it independently? No idea of the hours it's done to be honest, but it's an army unit so I'm guessing it's been well-used but well-maintained also. The engine is in really good order condition-wise, and runs beautifully. I know we have some pretty clued-up guys here on SD, and I'm hoping amongst them is someone with a good idea of what second-hand plant is worth 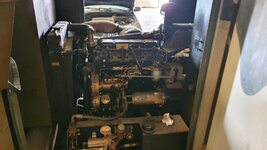 Too big for travelers to want!
£1,000 absolute minimum, but could be heck of a lot more.

Supporter
Worth a call to Rory at Mactrax, he has a fair bit of experience in exporting used plant.

Malxwal said:
Worth a call to Rory at Mactrax, he has a fair bit of experience in exporting used plant.
Click to expand...

Just up the road from me, too