As usual they ‚forgot‘ to mention the little technical quirk with SFP.
It can loose its POI when the magnification ring is operated.
H

One neat thing I like about my second focal plane Falcon x50 is that when you dial it down to 12x magnification the moa markers on the reticle become 2 moa markers, so it gives you lots more vertical adjustment if you need it.
M

Rider said:
As usual they ‚forgot‘ to mention the little technical quirk with SFP.
It can loose its POI when the magnification ring is operated.
Click to expand...

POI shift as magnification changes, is only something that happens with poorly made scopes.
Any decent scope will not suffer from that problem.

260 said:
Think what rider was getting at is the fact as mag is increased or decreased the reticle hash marks/Mil dots have different spacing values on a SFP scope as opposed to being the same values/spacing s on a FFP scope
Click to expand...

While this is true, I'm not sure how it can be an interpretation of that Rider said. Way back when, when FFP was the standard on high-end Euro scopes and everything Japanese and American was SFP, the Euro brands used to make a thing about the superior consistency of the FFP format, but as Bruce says, you had to have a really bad SFP scope for that to be a reality.

Do you have a Swaro? Ask them durectly snd they will tell you that 1.5 cm at 100m are possible and considered as normal.

POI shift happens in all SFP scopes as you adjust the magnification. The amount depends on how tight the internal tolerances of the moving parts are.

This has been discussed before on a thread here and someone posted a test/comparison that was done by a German shooting magazine on the POI shift of various high end scopes. See below for the results.

Also Schmidt & Bender specifically say in the ad flyer for their 3-21x50 Exos that all SFP scopes suffer POI shift when changing magnification and their new system keeps this to a minimum. I would have thought they knew what they were talking about.

SFP scopes are apparently less complex and easier to manufacturer too.

FFP for me. I can’t justify spending £2-£3k on a SFP scope that has a mechanical error in it and costs more than a FFP scope.

I am also dubious of the benefit of the FFP on high mag when half the reticule disappears off the field of view.

I've changed all my scopes to FFP, other than one thats setup for 1000 yard target shooting and thats only because I can't afford to change it. I use the hash lines for hold over and wind corrections all the time.
M

Edinburgh Rifles said:
Well when I meet someone who can demonstrate the theoretical point of impact shift of a SFP scope when mag is changed I will change my mind on usage
Click to expand...

The impact shift happens in cheap glass. I have seen it many times. It is almost an internal parallax error. The better the scope, the less it happens. A $50 scope from WalMart is more likely to exhibit this than a $600 Leupold.

I use some FFP for target shooting but keep quality SFP variables on my hunting rifles. ~Muir

Don't like SFP scopes very much, mostly because manufacturers can't get reticles correct.

These were designed when a 6x or, heaven forbid, an 8x scope was considered to be 'high power' and many viewed its use on stalking rifles in much the same way that some view the use of thermal riflescopes today.

Now, the 'a' in '4a' is supposed to designate a wider central opening for low light use. This reticle was often perfectly matched to the magnification, as seen with Pecar scopes. However, with the advent of high magnification variables, and the European manufacturers largely abandoning FFP scopes, apart from their 'tactical' lines, this central portion has grown so wide that the useful, thicker 3,6 and 9 o'clock posts are too far away to help much. The thin centre crosshairs can pretty much disappear in true low light/visibility conditions, hence the need to add an illuminated red dot. This phenomenon can be seen on the top end Swaro and Ziess scopes. 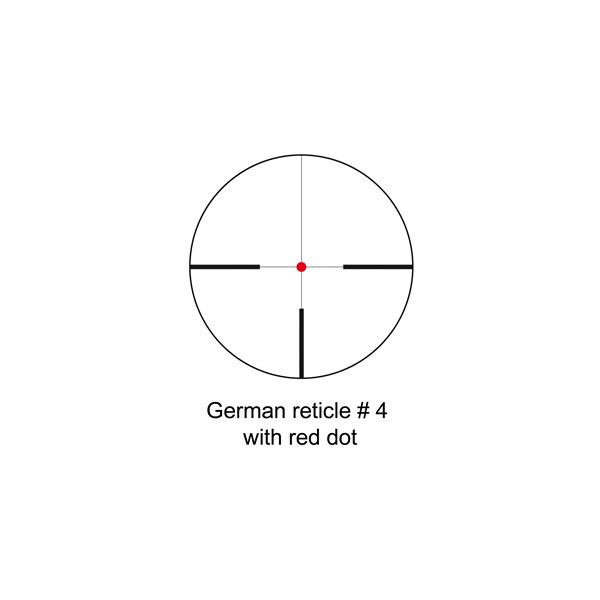 Conversely, Leupold (despite their many recent failings) got it right largely with their duplex reticle. It's a great 'all rounder' and many with no shooting experience will recognise it. 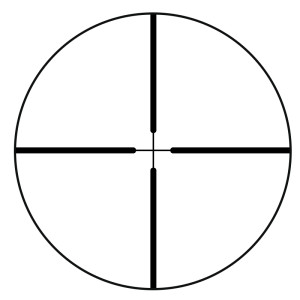 This formed a solid base for the Mil-Dot reticle, otherwise known as The One Reticle To Rule Them All.

You can change the Mil-Dot, but you can't improve on it. (Although Leupold managed to botch it by making SFP Mil Dot scopes with 1/4 MOA turrets

I have a FFP Zeiss on my .30-06. As soon as I can afford it I'll change for literally anything in SFP because in my opinion FFP is total ****.

There is no point in using the magnification if the ****ing crosshair gets fatter at the same ****ing time! What type of **** thought that would be a good ****ing idea? Target ****ers I suppose.

I have it on 8 power most of the time, at 80 yards the reticle pretty much entirely obscures a roe buck's head, so wind it up to 12 and all I get is a bigger ****ing picture of an entirely obscured black cross with ear tips poking out.

Good job I'm not too annoyed about it it might cause me to swear.

I have a Leupold SFP on my .22 which has no shift in poi from 4 power to 12. I've never heard of poi shift in SFP scopes but there again, I haven't used many different scopes.
P

I don't like ffp scopes. I had a couple of s&b 3x12 power scopes but I also found the reticle that thick at high mag that I would of been as well off with a fixed 6x42.
I looked through a few other ones with finer reticles that were OK at high mag but useless to me at low mag as the reticle was too thin.
Never seen any noticeable point of impact shift with my sfp scopes. Sightron and zeiss
The majority of F class shooters use SFP and these guys adjust magnification all the time according to the conditions so if there was any impact shift they wouldn't be using them.
What I have noticed from this thread and others elsewhere is that shooters seem to strongly prefer one type over the other.
Just use whichever you prefer and don't worry about it.

I have an sfp and a ffp scope on 2 of my stalking rifles.... my preference is for the sfp mainly due to the fact my "crow splitter" (223 general vermin work rifle) requires a sfp scope for the precision of shooting corvids out to 300 yards, I tried the ffp but couldnt get on with it as the reticule just gets a bit big.
I understand the benefits of ffp especially for longer range larger target stuff or when theres time to take over the shot at vermin etc. But for me most of my shots dont have much time so I like to be able to almost "point and pull" ....... I will propably reluctantly change the minox zp ffp for a sfp scope for my other stalking rifle. As for poi shift on sfp.... never known it happen on any of mine in 35 years of rifle shooting................

This isn't rocket science. It pays to do some basic research before investing in something that's clearly not appropriate for the intended application.....

Supporter
Both my stalking scopes are medium mag (12, 13x) ffp FD7, perfect for decent precision even on full mag at sensible stalking distances. I figure 12x is perfectly adequate for red deer, but perhaps you may want a bit more for smaller deer at extended range. If Schmidt did an FD7 that went up to 16 or 18x, I'd be all over it !
My big scope is 30x ffp, but when on lower mag on occasion its gone stalking, functions as a crosshair with fine floating dot.
M

Supporter
I must back track a bit: I do use FFP on a couple of my varmint rifles. These have ranging reticles and this is what FFP is good for -especially when you have a spotter using a ranging spotting scope. Otherwise, for big game, a SFP variable works fine.

I have noted one part of impact shift that people over look. It's just refinement. I run 2-7X or 3-9X usually. If I zero on 3X "dead center" and jump to 9X I am likely to find the group not so dead center as before and requiring a slight adjustment that is never noticed when I dial back down to 3X.

I have used bargain basement scopes -like the old $40 BSA's from WalMart that would have the poi rotate around the reticle as you went up in power. That's just a junk scope.~Muir
S

C h r i s said:
This isn't rocket science. It pays to do some basic research before investing in something that's clearly not appropriate for the intended application.....
Click to expand...

NOW you tell me!

Yep. Never encountered it and if I did I would bin it!