Starting off in stalking 3

Starting off in Stalking 3

Chuck had arranged to pick me up at 3.30pm to allow plenty of time to do a rece of the wood first, as he had never seen it before. We got to the shoot therefore, at about 3.45 and proceeded to get our gear together.
Even though it was just a walk round to start with he decided that we should walk fully geared up as a shot might present itself. After putting on my camo’ gear top (Deerhunter folding suit), head veil and hat I slung my bino’s round my neck, strapped my knife on my belt and then checked and loaded my rifle. The safety applied, I then picked up my stalking sticks and we were ready to roll.
My sticks incidentally are just a pair of hazel wood rods, drilled through about 15” from one end and joined with a leather thong. These are just as serviceable as the shop bought ones but at no cost!
We set off into the wood heading east and then stopped a few yards in when Chuck did a brief scan with his Bino’s and indicated that I should do the same. He whispered to me to focus mid range and then use the focus to look past the close foliage and on into the distance. I did this and it was as if I could see through the near foliage. Chuck whispered for me to stay still and indicated a spot to look at. After a while I became aware of a buff coloured round area and after refocusing saw a roe looking back over her shoulder at us. I was amazed that we should be seeing a deer so early but realised she was out of season and anyway would not have presented a safe shot being to our east and therefore in line with the road.
We continued to watch her for about 5 minutes and then she moved off along a path crossing right to left into the forestry. It was obvious she had not seen or winded us so lesson number one had been learned. Even if you are just walking round, wear the gear and take it steady, you never know what you might see.

After a while we moved off again and I could see that Chuck was using an easy rhythm of 10 or so paces followed by a pause to look around. He also told me not to just look ahead but to also check the sides and sometimes to the rear because deer sometimes move after you have passed and also that you get a different perspective view as you move along.
Every now and then we would also use the bino’s and by now we had changed direction and were walking along the main ride on the edge of the forestry.
We reached the edge of the south/north flowing stream and as the banks were quite steep and muddy Chuck instructed me to unload before crossing. 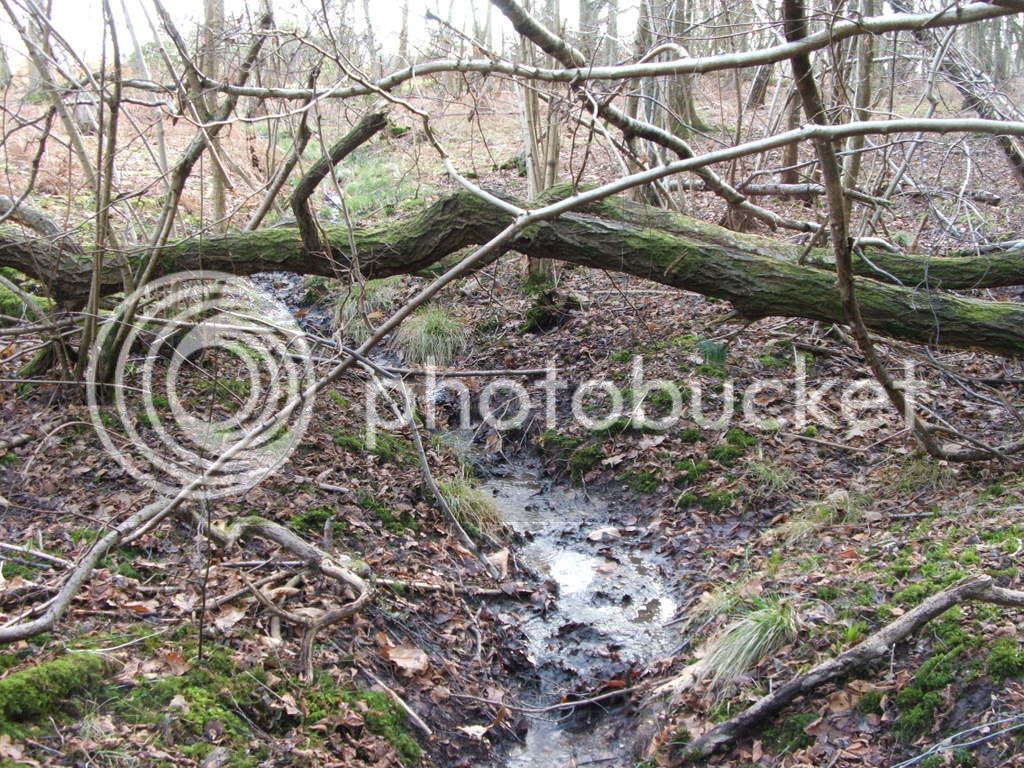 Being a shot gunner this was nothing new as I was well used to “breaking open” before crossing an obstacle. With the T3 however, it was a tad more fiddly as once the magazine had been dropped out I had to work the bolt to eject the live round up the spout. I then had to reach over the rifle with the left hand to prevent the ejected cartridge from dropping to the ground.
Anyway we crossed over and noted that it was also a deer crossing point with lots of Muntjac and Roe slots in the soft muddy bank side. Chuck said that by the way the slots splayed at the top of the bank you could tell that the deer were jumping the stream at this point. 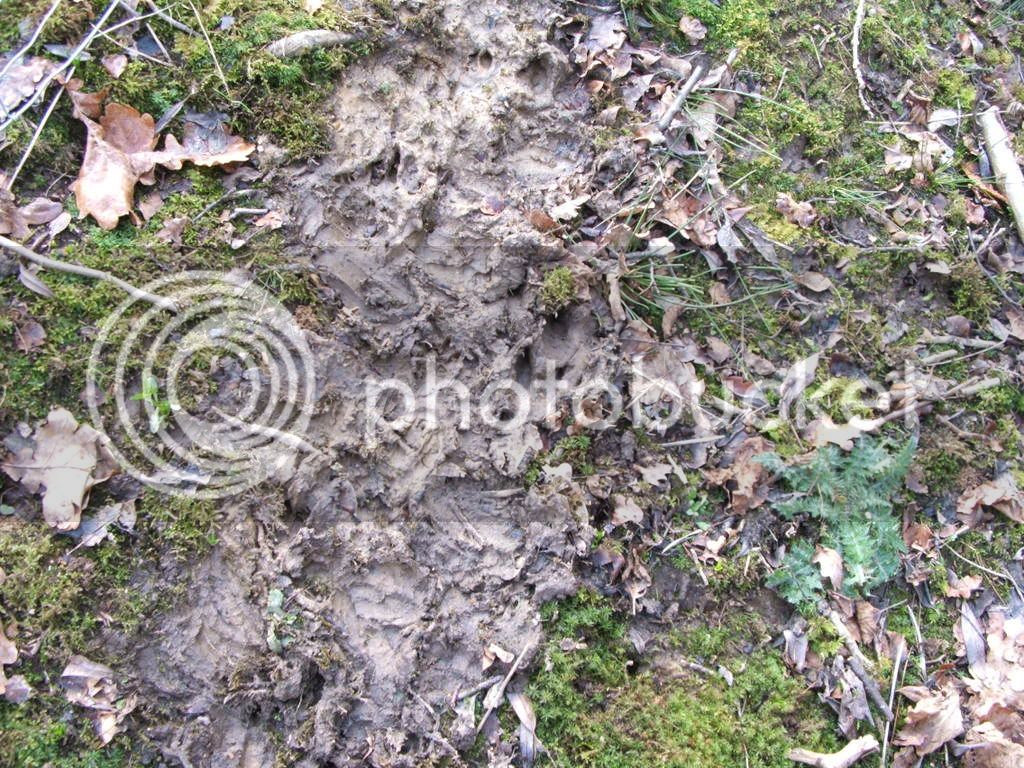 We both now reloaded and moved off along the edge of the ride. After about 10 more minutes of the 10 paces and stop to scan routine, Chuck suddenly froze and motioned for me to stop and follow his gaze. There slowly moving through the hazel coppice to our left was the unmistakeable shape of a small deer.
Chuck whispered to me to use the bino’s and identify it which I did, and confirmed to him that it was a muntjac buck. “What are you waiting for then”, he said. “Get your sticks set up and wait for a shot as your backstop is OK-you know where to shoot for a heart and lung shot”. As slowly and noiselessly as I could, I spread the legs of my stalking sticks and unslung the rifle and placed it in the sticks resting in the fingers of my left hand. Whilst doing this I was keeping one eye on the munty.
It was still on the move, going behind a section of coppice and then reappearing, sometimes browsing a leaf or two and then head down to check for food on the woodland floor but not stopping. By now it was about 35-40 yards away, moving from left to right. It looked as if it would cross our ride in a few minutes and might then see us. 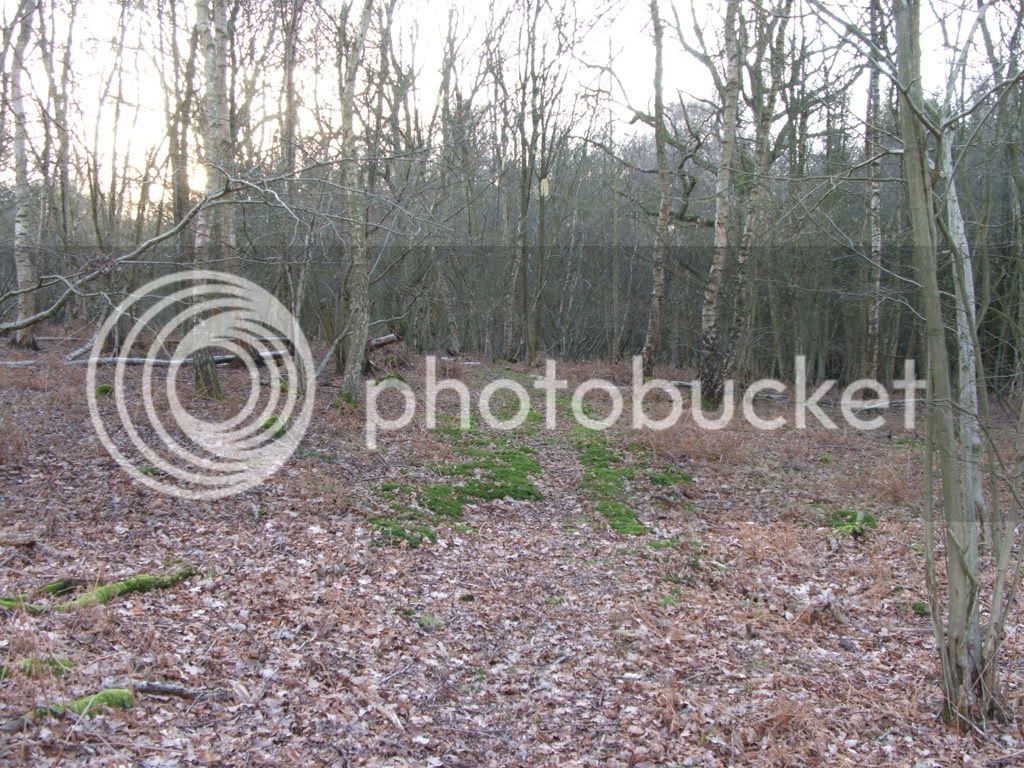 I whispered to Chuck, “should I shoot now or wait?”. He said that once it reached the open it might well pause long enough to get a shot off so with heart starting to pound I waited. Sure enough the deer reached the edge of the ride and stopped, looking our way. I raised the rifle in the sticks and looking through the scope I could see the deer looking our way. It raised a foreleg and stamped twice, then made to move off. Quickly I centered the cross hairs just behind the shoulder, held a breath for ½ a second, steadied and squeezed the trigger.
The deer literally jumped in the air, swivelled and then ran across the ride, hit a tree and collapsed in the forestry. I could just see it kicking and thrashing about and I wanted to move over to it but knew from the book I had read that I needed to reload, put the safety on and then wait for 3 minutes or so in case it was only wounded.
I quietly asked Chuck about this and he said that if it was only wounded then it might well run again once it saw us walking over.
It seemed like an age but eventually Chuck said it was OK to move and on reaching the deer he told me to gently touch its eye with the end of my stalking stick to make sure it was well and truly dead. No reaction from the deer and so with my gun unloaded, my first kill was in the bag and congratulations from Chuck!! 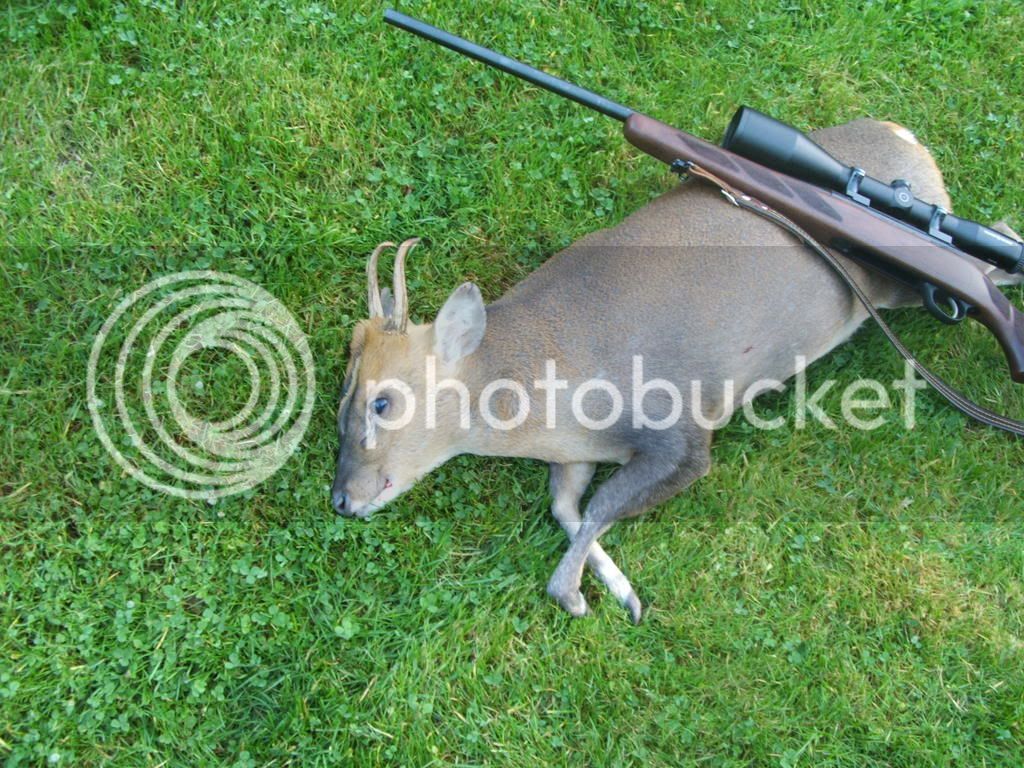 To be honest I had not dare hope that we would shoot one first time out and quite so quickly as it had only been and hour at most since we had arrived.
I remarked to Chuck that I thought that most deer were shot either early in the morning or at dusk. He said that was mostly true for roe but that muntjac often roam about during the day in a quiet wood that is not often disturbed or shot.
The buck was reasonably mature as it had quite big horns with the start of brow tines.
We inspected the bullet wound which was quite neat and in the correct place on one side but skewed over and pretty large on the other.
Chuck explained that my bullet had entered the deer in exactly the right place but had then probably hit a rib or shoulder and moved over, hence the large wound in a different position.
After a few more minutes of looking at the deer I got on with hanging it up to bleed from a tree and Chuck showed me how to open up the neck to achieve this. I then went back to the car to get the folding shovel and once back with the deer dug a hole for the gralloch. Chuck instructed me on this and once done we collected up our gear and dragged the deer back to the car. (Chuck had shown me a neat little trick to achieve a smooth drag by bringing both the forelegs forward around the deer’s head and then trapping them there with the dragging rope).
Sure enough, once back at the car the munty fitted inside the green plastic box a treat so no mess in the car-bonus!!
Well that’s it. After a celebratory pull at the hip flask everything was packed away and we drove home to hang the deer in the garage with a piece of plastic pipe inserted as a rib spreader to aid cooling. Skinning took place that evening whilst still warm and was butchered next day as the weather was to warm for an extended time of hanging.

Supporter
buckstalker
as i read this i thought of doing something similar myself , so as a trial run hav you thought of asking admin to put all your posts as one long continuation with replys set as another post so we could all read your story from start to finish as it took place so it would look like
stalking part 1,2 and 3 all in sequence then the butchering following on from that
just a thought
stone
B

Well told story, thanks. I love reading these accounts, we all have our own individual perspectives, and it's good to hear others.
Mark
B

Hi Stone
Yep I did think about putting the whole lot together but there is a limitation as to the length of post on the forum. Also you can only put so many photo's on at a time, otherwise 2 and 3 would have gone on together.
Thanks for the thought

Site Staff
A nice buck and a nice story, lets hope the future goes as smoothly.