Last night saw me heading an hour west, towards the Welsh border, for an outing with someone new. Herbert’s recommendations from others who have been out with him all seemed positive, so an outing was arranged. A friendly greeting was waiting for me and we chatted about the large area of various blocks of ground he has available and about places we had in common from previous outings and a mutual acquaintance we shared.
A short ride in the truck took us to our evening’s destination, and Herbert chatted to the landowner as I got all my gear ready. A walk up through some recently felled ground had me breaking the ice by immediately sinking into the mud, cursing the recent incessant rain and struggling to extricate myself. Not sure I managed to style it out! A steady scanning walk past the small clear fell took us up a rise to our chosen waiting point. 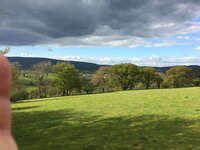 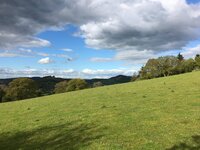 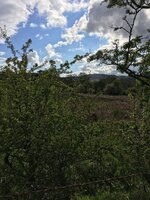 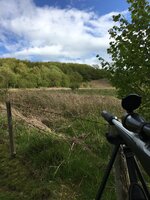 The long wait then started, but as the pictures show, what a place to be waiting. The bank we were overlooking bordered a block of woodland, and for want of a better term, just looked “deery”. At about 7:30 pm I spotted a muntjac doe, beetling her way down the hill. A quick change of position had me back up on the sticks with Herbert reading out the range to me. She was hanging around and was at a shade over 180 yards away and not offering an easy shot. With a gut shot muntjac two weeks ago weighing on my mind, I let her pass and we returned to our original spot. By this point the sun was setting further, with a corresponding chill in the air and the battery warming light was flashing on my thermal. As the last of the evening glow started to fade, I spotted the hint of movement and a flash of chestnut colour at the edge of the trees. A scan with the thermal picked up a slight trace and then a moment later a buck hopped over the fence with a very heavily pregnant doe in tow. Now I should mention at this point that I’d said to Herbert when arranging the booking, that I’m not a trophy hunter. It’s just not been my thing, however I do recognise and whole heartedly support the principle. Herbert clearly remembered this as a few swear words were uttered forth as we both realised what a good buck he was. Quick as a flash I was told what he would cost and then I had some decisions to make. On other grounds with other guides I’ve let pricey bucks with good heads pass. Latterly I’d come to think that having had a tough year in the last 12 months, like all of us, I might change my stance if the opportunity arose. With his attendant doe, likely carrying twins bearing his good genes, I came to the conclusion it was on. For a few moments, the pair fed away, about 80 yards from us, typically with her offering a perfect broadside and him not offering an easy shot. At the point they clocked us he was offering a quartering shot and down he went. The five minute wait before walking in had me having an attack of the buck shakes. Thankfully they’d held off prior. 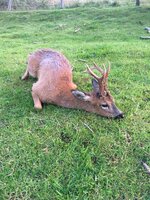 Herbert performed a swift gralloch as the light ebbed away. I was somewhat concerned about the rearward position of the exit wound, but all was well and the 90g Sako gamehead had done it’s typically devastating job to the vitals.
He’s now hanging in my chiller. Not my first deer, or my first roe, but as my first roe buck, he’s a corker. I can heartily recommend Herbert and time permitting I shall be back for future outings. Like I said I don’t do trophies. Herbert’s doing me a skull mount...
Click to expand...
M
Written by 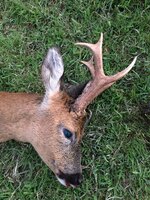 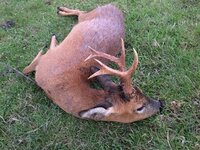 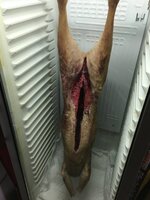 Supporter
Awesome buck and glad he's getting put to good use as well! well done
U

Cracking Buck. Congrats! Not even old, no judgement on culling him meant in saying this, but probably a gold medal in a year or two!

Excellent, well done sir. A memory which will always bring a smile to your face.

Supporter
What a lovely Buck, i'm out with Herbert next week and very much looking forward to it. Similar to you i'm not a big trophy man, it's the experience and learning that makes good memories (though in your case the head mount may also work )
P

Awesome buck well done!!!! If you split the chest it will help him cool quicker

Cracking buck! Well done, and thanks for sharing the your story!

Supporter
And now on the wall.

A cracking buck, might be worth getting him measured sometime........
R

Fair play and a great write up. Not sure what I would have done in that situation but I guess no one can until they are. Wonderful memory, lovely trophy and freezer full of quality meat. Hard to beat!

Millerich said:
And now on the wall.
Click to expand...

How did the antlers get so much darker between the photos ?