Another week, another visit to the new permission, which I'm not sure qualifies as new anymore. Wasn't sure I was going to get as lucky this time, the rut is over, the bucks usually give it a few weeks in cover for a breather before they come out again in September. The bloody wheat isn't off yet so spotting them is interesting, getting a shot off even more interesting, but the dog wants a decent walk so off for a mooch about.

I wanted to head for the far side of the farm. It meant a 2km carry out to the truck if I got lucky as I can't drive on the fields yet, but Roe are only little. I walked into the SW wind, across the forestry edge until I got to a nice little shooting point at the top of the little valley. There was a set of ears sticking above the wheat 300m away, but no antlers. Half an hour later I see movement, a buck. He wanders out of the forest at the top of the far hill about 250m away, turns left and heads down the tram line towards me. Perfect. After 50m he stops, wanders into the wheat and disappears. I scan the area for 30 minutes. I'm sure he hasn't gone far, probably lying down out of sight.

There is a rustle behind me. Dog's on high alert. Out of the wheat appears a little spotty fawn, followed by mum. They are 30m away and wander towards me. Dog is beside himself now, shaking like a leaf but glued to the spot. At 10m I decide to break cover. Should have done so before but was enjoying the spectacle. It all kicks off, they both turn tail, the doe barking as she goes. I turn round to see matey boy pounding down the hill towards me, obviously disturbed from his slumber by the does commotion. He gets half way down the hill and stops, half hidden by the branches of a big oak that hangs over the field. Unfortunately he decides not to come any further and breaks left into the forest. Bugger.

I pack the kit up and head back towards the car. It's 1930 and if I'm going to shoot one now I want to be a bit closer to the vehicle. I follow the forestry edge scanning as I go. Wind is far from perfect in this direction but anything in the wheat shouldn't wind me. There's doe on the forest edge about 150m off. I stop and after a few minutes she catches my wind and flits quietly back into the forest. I spy a buck 300m into the wheat, just his head showing. That's not going to fly unless he comes to me. Another two sets of ears out there, but both does. And then in the field corner, still 500m off, there are two deer. I can't make out whether they are bucks or does at the moment, but worth an investigate.

I'm walking along a 3m field margin, the grasses patchy but up to 1m high, forest on my left, wheat on my right. Nice and slowly I close the distance to 200m. They are both little cull bucks. Two year olds I would think, not old enough or big enough to rut, just hanging out together. I close the distance further, down to 60m. Moving while they have their heads down in the wheat, freezing at the sight of an head emerging. Now the tricky bit. The only option is going to be a neck shot. At 60m thats not an issue on quad sticks but I do need to make sure they stay still for long enough. I bark. Two heads pop up, alert but unsure whats going on. First one down. Second doesn't move, reload, bang. It goes down. But then the bugger is up again. I have reloaded already, look through the scope and he's on his feet, head in the air and I can see claret spurting from his jugular. Another shot and he's on the deck for good. Lucky this time, but that's why my preference is always a chest if possible.

Both gralloched, nothing to report apart from the fact they are both pretty small. I've taken 5 in the last two weeks and the heaviest has been 14.5kg. I've only shot cull bucks, nothing special, but in Suffolk I was used to most bucks coming in at 15kg plus. Perhaps it's just the density here that's causing the problem. I can't believe they are competing for food this year. The other odd thing is that I've not seen a doe with twins in 6 visits, only singles. In Suffolk I was used to twins or even triplets. Small bucks, single fawns, it's all pointing to something being wrong.

Long carry back with a roe over each shoulder, legs tied like a handbag strap. Backpack on, rifle in one hand, sticks in the other. I'm glad I didn't meet anyone on the way, hate to think what they would have thought.

Back to the car and reach for my glasses.....

Again. I thought I had learnt my lesson last week. This time however I have no recollection of where they are, the shot sight is a km away and it's almost dark. Guess where I'm off to this morning? 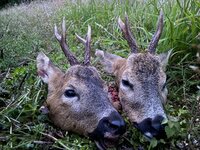 I feel your pain with the crop! Our wheat is still standing too. Think I saw the sprayer out last week though, so hopefully it'll be down soon. I have a cull buck I've been seeing recently too, but getting to him might be a challenge due to the crop. Nice job on your two!

Excellent! I tend to put mine straight in the roesack pockets before I start the gralloch. I just know I'd lose them otherwise
T

Supporter
Nice write-up N, the crops are still standing yet on most of the ground I cover and the margins are chest height in some places, not easy to spot Roe at all.
I know there are a few kicking about as I have bumped some right on the last light heading back to my vehicle, just too dark for a safe shot, heho that's stalking for you. 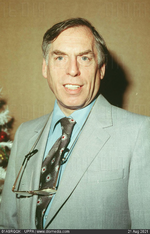 The line has to be drawn somewhere, although I might have to resort to that if the contacts don't work. Optician booked for Tuesday.

What bullet were you using Nigel?

Supporter
Still on the 150 ABLR's in the 7mm08. Don't need them for the Roe, but it's all I have until I can get the bench set up in the new house and load for the 6XC...when it arrives. Planning on the 95LRX for Roe, although will try the 80.5gr Yew Tree and the 84gr VLR4 as well to see how they perform.
You must log in or register to reply here.
Share:
Facebook Twitter Reddit Pinterest Tumblr WhatsApp Email Share Link