Supporter
I’ve tried most top end sticks. Honestly, I’d pick my seeland sticks every time. Cheap and cheerful and a perfect, it not the best solution for the job. I’ve found other top end sticks too slow to deploy, too noisy or too rigid to adapt to uneven terrain or a target that won’t stay still for long. I also wouldn’t be too upset if I lost or damaged them. The furthest deer I’ve shot to date is 211 yards, that was using the seeland sticks. I can’t recall the last time I shot a deer from a bipod after getting the seeland quad sticks. 200 yards or so is easily achievable. You could stretch out well past 200 though given how stable they are

Viper flex elite for me

Supporter
I’ve worked my way through most quad sticks over the last 7 years in the quest for that perfect set - I’m 6’4” so there are challenges! Started with Seeland Decoys after I used a set of Vipers on the range (but could not afford them), then Mjoellner Fenris Mk1 and I briefly had a set of Rudolph bought on the spur of the moment at the BSS (too heavy and I hated the elastics). I then managed to pick up a cheap set of Vipers and I love the closure mechanism and the geared head - that is IMHO the downside of the Seeland Decoy/Bushwear sticks. You need the covers though otherwise they do whistle and my set were cheap as the previous owner had taped them up and the hardened duct tape glue had made a real mess that stubbornly wouldn’t clean up easily. I then bit the bullet and went for a set of Carbon Fenris which are excellent but a chance opportunity meant I ended up with a set of Blaser V2 sticks at a steal of a price. These failed on me in the field with minimal use - the track under the rotating head broke through. Blaser UK replaced these by return with no quibble and candidly, these have now become my go to sticks. They are a little heavier than the Carbon Fenris but as I have the Spartan universal mounting plate on all 3 of my stalking rifles and I’ve turned down the Blaser spigot to fit the Spartan mount, it gives an accurate, reliable, positive and quick to mount solution which, with the twisting handle, make tracking/acquisition a doddle. Last picture are my Fenris Carbon with a Viper 5th leg - you can have the best of both worlds 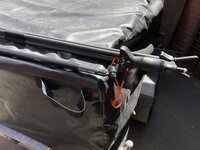 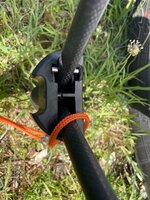 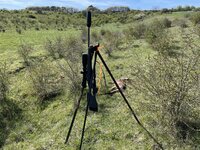