Lad has a new house to move into but it needs a lot doing to it, so I packed the truck with paint roller, wallpaper strippers and marigolds and set off up to help him for a few days. Not forgetting a few bits and pieces of essentials like binos and stalking kit….

The new house has a nice outbuilding that was probably the abattoir when the house was occupied by the shepherd, so I sourced an upright fridge/chiller and stuck that in the back of the HiLux as a bit of a housewarming present.

The weather’s been shite but this evening was looking promising. We’d been round at the keeper’s house this afternoon looking at James’s new puppy and he mentioned a young buck he’d missed a couple of days ago at the far edge of a forestry block. Much banter between the three of us over his admitting to missing and he good naturedly suggested we ought to go out and see if we could find him.

We had a couple of other places to look at first, where James had taken a belter out of a young plantation but where another buck was likely to have moved in, and sure enough we set up and gave a couple of squeaks, to see a buck charging at us from downwind, before turning smartly as he winded us and disappeared off down the tree line. Never mind, he’ll come again.

Candidate two was a corner of a wood with a steep banking down to a burn in a flat valley bottom. We planned to walk out at the top side, before coming back along the valley into the wind and working through a large patch of hawthorns. They knew a doe kept that corner and had been seen with a buck in tow recently.

The cover was impossible, and we decided to extend out into the hill behind the new house, about a mile across the moor from where I shot the buck a fortnight ago. We walked along a fence line well hidden from the wood edge, and then settled at the head of a gulley leading back to the forestry block.

I set up the sticks and James pointed out a safe arc of fire before hunkering down and gave three squeaks on the buttallo. Almost instantly a young buck appeared at the top side of the gulley about 80 yards away. He paused, skylined and I waited for him to drop down the side to give me a safe backstop. He did so but kept coming straight at me. I tracked him with the cross hairs hoping he’d turn side on, but by now he was getting very close! Finally he stopped, front feet up on a tussock and sniffed the air trying to work out what I was. As he stretched his neck up the cross hairs settled on his throat and I took my shot. That rifle is zeroed at forty yards and that was about where he obligingly stopped. He folded instantly, not even a twitch.

A pic to the keeper confirmed it was the one he missed earlier in the week.

Anyway, he’s now in the new chiller and in a few days James will be collecting little Buck the lab puppy

Supporter
Well played on being a decent Dad!

Scapegoat said:
That rifle is zeroed at forty yards..
Click to expand...

Well that has been gnawing away at the back on my mind all day. 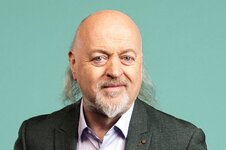 Stalker1962 said:
Well that has been gnawing away at the back on my mind all day.

I chose 40 yards cos the ballistic calc shows that as the best curve available for the use the rifle is put to. The soft load is said to be the best weight of N140 for accuracy, and they weren’t wrong.
You must log in or register to reply here.
Share:
Facebook Twitter Reddit Pinterest Tumblr WhatsApp Email Share Link