Earlier this year I set up a squirrel feed site in a wood that has seen little squirrel control in recent years. I did write a report in Write Ups about the set up but wanted to report on how it has been going. I also posted in a recent similar thread that has been closed. Anyway the set up is that I identified a promising area in the wood that is pretty dense and contains plenty of mature oak trees and numerous dreys.
The area has a population of fallow and muntjac plus a growing population of roe. I did a little clearing, set up a high seat about 30m away and put a camera on a convenient tree.
Initially I put whole maize into a redundant pheasant feeder but fallow bucks thrashed it so now I throw a mixture of whole maize and cut maize around the target area twice a week.
I sit in the seat whenever I see plenty of squirrel activity on the camera which is a least once a week.
I have found the best time to be an hour or two after 1st light.
I've been shooting 4/6 squirrels and the odd rabbit in an outing with my 22lr and usually sit for an hour or two.
If anything I'm seeing more and more squirrels each time I go.
My last outing resulted in 16 in 3 hours and my total is now 56.
HOW MANY am I going to get from this feed area?

Its great sport and good practice with the .22RF. Much better than shooting drays.
one hour after first light is usually the best time.
I do a circuit of all the pheasant feeders using sub sonics.
16 is pretty good for one session. I would normally get 3 to 6 a day ,on a daily basis.
you should get 2 or 3 hundred over a year . You also get to see all the other wildlife and deer so you can make a plan
( and of course the occasional fox

badbob said:
Its great sport and good practice with the .22RF. Much better than shooting drays.
one hour after first light is usually the best time.
I do a circuit of all the pheasant feeders using sub sonics.
16 is pretty good for one session. I would normally get 3 to 6 a day ,on a daily basis.
you should get 2 or 3 hundred over a year . You also get to see all the other wildlife and deer so you can make a plan
( and of course the occasional fox

Yes I'm seeing loads of stuff on the camera and from the seat. I agree it's great sport as well as being necessary. I have got regular fox visits probably because I'm leaving a squirrel or two each time I visit. I've got to recognise numerous fallow and munties which will pay dividends eventually.
My friend and I joked about getting a hundred squirrels from the one site in a year. I'm now thinking I will easily get that many. I'm now wondering from how far I'm pulling them in to the food as I was going to set up another feed station..

It's intriguing how quickly squirrels fill in the gaps.
I'm guessing that they are always checking out the boundaries of their territories and if at a given moment they sense a vacancy, they will move into their neighbour's patch; but there must also be a population of squirrels without territories of their own constantly prospecting for somewhere to set up house.
On top of that, the more food there is available the more likely it seems that squirrels will tolerate close neighbours and the the easier it may be for new occupants to move in.
In short, I suspect that feeding stations draw in squirrels from quite some way away and produce comparatively dense localised populations around them, that the shooter then does their best to control.
If this is right, then the best place for a feeder is in woodland where squirrel damage would not be a particular problem, either to trees or to songbirds, since feeder locations are likely to support higher squirrel densities despite attrition from shooting.

I originally put a feeder up one end of a long strip wood and shot 32 off it . When the feed slowed up I moved in 100 m to the edge of a recent planting scheme where I’ve now had another 75 .Just when I think I should move the feeder again it turns up another decent session .They travel a fair way that’s for sure and as dominant bucks are removed ,territory is opened up as stated .You can tell those squirrels with a low rank as they are very wary around the feeder ,sometimes not committing at all .They can be frustrating when they won’t stay still for a airgun head shot but that’s hunting .
Im going to leave that feeder where it is and stick another the far end to where I started and get a mate to shoot it same day ,next visit .For me ,a two week break between shooting yields the best results .It’s a fair jaunt across fields so I want to maximise my time in the hide .
Saw a cracking roe buck last time that has travelled from elsewhere as I’ve trail cams everywhere and he’s on none of them until Sunday .He walked past back of the hide and allowed me to film him for a minute .Pity this forum dosnt support short vids as he’s of interest I’m sure you’d agree .
Shot 7 last visit and while I was walking out the wood I came across a group of 6 more in a group on the floor all chattering in low tones .Probably doe in heat .The downfall of this time of year is the mating season ,they will ignore food if there’s a doe calling to be served which I guess is the same species world wide

The small bird population is doing well with 11 species recorded at the feeder including the rare willow tit .
The numbers of squirrels are staggering mind for a strip of wood about 400 yards by 80 but not complaining .Farmer has trapped another 14 in his garden other end of the farm ,all from a hedge that is a corridor between two spinneys and the wood .
I‘dleave your bait station where it is sir ,feed heavily and let them come to you

As stated the golden hour is an hour after sunrise but trickle in all day if you have time to sit and wait .The next busy time appears to be two hours before sunset .
Ive a vid of a squirrel on the feeder at 2306 mind and another at 0346 so they will feed at night .I suspect they are very low ranking squirrels that are pushed off in daylight .One has a half tail but not seen him daylight on the cam .
Happy hunting

uptonogood said:
As dominant bucks are removed, territory is opened up, as stated. You can tell those squirrels with a low rank as they are very wary around the feeder, sometimes not committing at all.
Click to expand...

Some really interesting observations as regards sex and rank - I've noticed that there's a "pecking order" but I shall be looking out for the ones near the bottom of it now.

As stated, the golden hour is an hour after sunrise but trickle in all day if you have time to sit and wait. The next busy time appears to be two hours before sunset.
Click to expand...

Absolutely, though I think the sunset peak is probably shorter than 2 hours round my way.

I've a vid of a squirrel on the feeder at 2306, mind, and another at 0346 so they will feed at night. I suspect they are very low-ranking squirrels that are pushed off in daylight.
Click to expand...

Remarkable. I haven't seen anything as nocturnal as that on the feeders, but have seen squirrels out well after sunset through the thermal.
It's extraordinary how the technology of trail cameras and thermal imagers is constantly teaching us more about the commonest of wildlife. Though if we were not also out in the field hunting at all the hours on the clock in all the seasons of the year we wouldn't be seeing any of this behaviour. 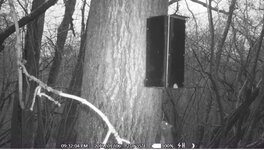 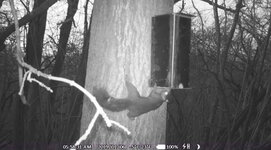 All very interesting and informative. I've definitely noticed the pecking order with the dominant males hitting the feed with no regard for others and also the bottom of the pile guys very nervously approaching the area. I'm away at the moment but am hoping to get out for a look at the end of the week before going away with work again for a few more days. I'll report back........

Something else I’ve noticed is that a barking squirrel near a feeder usually means an imminent visit from one of the larger specimens .Whether its the big un doing the barking is debatable as I’ve yet to pinpoint the noisey urchin .
Shoot this individual and you will see an upturn in visits .The young ones as well that are usually too afraid to get near the feeder .Shot a monster Sunday morning and for an hour it was hectic squirrel action .Had 3 lots of two arrive and bagged a brace off one but usually not a good thing as one goes away educated ,at least for that day .Food gets the better of them in time I’m sure .
Dead squigs underneath the feeder may put off a few but in general they tail flick only to return to the food .
H

An update. I'm now up to 74 squirrels. I've been visiting the feed area about once a week and averaged 4/6 per visit. Things have, however, suddenly slowed down and the last 3 visits have only yielded one per visit. Also I'm seeing very few on the camera. Loads of other stuff visiting though, especially muntjac and many small birds. It's a 20 ha wood split into two by a ride. I'm set up in the top half which is only a 100m away from another large wood. I've decided to leave the seat there and continue feeding for the year as I'm sure I'll continue getting the odd squirrel and I've been fattening up plenty of muntjac and fallow . I will set up a second feed area in the other half of the wood which is also connected by a dingle (narrow wooded valley) to more woodland. The two seats will be about 300m apart. The bottom half of the wood has been thinned and replanted and is the main reason for reducing the squirrel population.

Nice going sir .Personally I would set up a new station and put your feed in that rather than two .Leave for two weeks topped up and try again .I’ve just moved my big feeder and the numbers are building up already .Decent session on the cards week Sunday hopefully .It’s back in an area I did first but numbers have filled in from another wood nearby I’m sure .
You must log in or register to reply here.
Share:
Facebook Twitter Reddit Pinterest Tumblr WhatsApp Email Share Link