It is very rare for me to offer a write up about shooting a deer but today was a hunt of patience and more patience with a lot of excitement,nerves on edge even for this old time deer hunter.
I do see quite a few deer that "could be" but as generally I`m solo i do leave them alone and jump on any that are 'good to go'


Today was the chosen day to take this fresh out of velvet sambar spikey. I had actually seen him a couple of times previously but he had given me the slip quite easily.
This morning I was a tad later than usual and although I wasn't expecting to see him I saw him below me instead of my normal "pass him in the dark,if he`s there routine" on my way to other places. I had seen him twice in my headlights cross in front of me and thought that he would hang up as a good one. Right I thought, i`m gonna have a crack as he is in a top retrieval spot along a little ferny creek down hill from me with good ute access.
I stood the tripod up,set the height for the rifle not the camera and placed my beanie on top for less clunk etc and waited and waited.
He stood a while obscured with rubbish under growth and I waited even more until he decided to put the head down and feed. I waited even more and as a decent width gum tree was `tween us I couldn't see him for quite a while,so I waited even more, barely moving as I was standing under a Narrow Leaf Peppermint Gum,notorious for crackly twigs strewn under them.
He was by now around 80 yards away then moved again. Still unseen after 10 minutes of painful waiting later. My nerves (yes) had me on a real high in anticipation of a crack. The 9.3 x 64 Brenneke was almost screaming for a shot too.
Is he going left or is he going right or is he going away with the tree between us? Faark me I waited and waited even more then saw a smidge of him left of the big Gum,whoa,I can't move the tripod as he is even closer now.
Then he disappeared behind the gum again,phew,knees aching,feet cramping,brain fading...then a nose appeared down along the creek. He was right of the tree, perfect for the tripod. His head was down and all I had to do was wait for him to step into the sight zone praying after 30-40 minutes that there would be no last minute 'wind swirl'
He stepped forward,shoulder offered, BANG and believe it or not I actually saw the last of him go down under recoil in the scope. That is a very sweet rifle to allow that with the calibre well known for recoil. It absolutely flattened him.
Bullet entry marked in pic,exit showed the force of the `64 on exit with its plucking of bristles around the wound.
I had a wonderful rippin` morning and got my ute down to him in low four on the geasy slope,hooked him up whole and he is now residing in the open shed.
Life...be in it!

The tree that obscured him for quite some time,it is around two metres in dia at the base and thats where I was seeing bits of him down the hill. 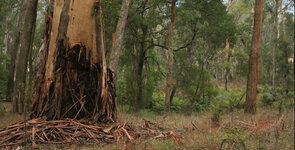 Where he dropped,entry under the red X.

The plucked exit behind opp shoulder.

I dont feel comfortable in public deer areas without some colour.
Only recently whilst a mate and I were sitting over tripods waiting for deer a shot rang out,it was half a k away BUT it puts the wind up ya!
Morning gunk in my unwashed eyes.

Loaded to go home. The rope is to stop the swinging. 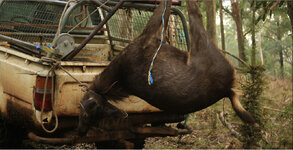 Good eater there! Well done, we all get excited from time to time, bit of “buck fever” keeps it fun doesn’t it!
K

Supporter
As always brilliant write up mate , I think we've all been there playing the waiting game for a shot to present itself ,

I've not been out since end of April!!! I'm working and doing a loft conversion on our house ,,,,, nearly there though , and then ill be back out , can't bleddy wait , I'm itching like a dog with fleas to get out

A mate arrived this arvo with a recip saw and tomorrow morning the deer will be full length split and the mate will take a side home with him.
Dogs have had a good go at the internals so far,very little goes to waste here. Even the green **** filled runners will go to wild dog bait.

Supporter
John, do I understand correctly that you were hunting in a 'public hunting area' ? Hence the 'blaze'. How large an area would that be and do you know if there may be other hunters in the area ? and if so, how many ? What weight would he be in the larder ?
H

Excellent write up. It's great to get out, see and photograph them but hunting, the anticipation and pulling the trigger is on another level.

camodog said:
John, do I understand correctly that you were hunting in a 'public hunting area' ? Hence the 'blaze'. How large an area would that be and do you know if there may be other hunters in the area ? and if so, how many ? What weight would he be in the larder ?
Click to expand...

Area? Locally measured in many many square miles rather than acres.
One never knows if there are others "definitely" as the ranges are so big.
Larder weight? Is that gutted/hocked/skinned? If so and I don't know maybe a couple of hundred lbs.
He isnt a big deer at all.

John Gryphon said:
Area? Locally measured in many many square miles rather than acres.
One never knows if there are others "definitely" as the ranges are so big.
Larder weight? Is that gutted/hocked/skinned? If so and I don't know maybe a couple of hundred lbs.
He isnt a big deer at all.
Click to expand...

I see. I thought the areas would be huge. With you saying you had heard rifle shot close by I wondered if you had to inform 'an authority' just which area you were hunting and if thete was some kind of restrictions imposed on number of hunters 'on the ground' so to speak.
By 'larder weight' I was thinking gutted. Really good eating animal that one, good and tender...one to keep for family and friends !
S

Great write up. Thanks for sharing it.

I thought (wishful thinking..) I was to have a crack at him if/when I can drop down.........damned slow-boat n passage..
Thank you for great read and the photos - made a hum-drum day! That 'ol x64 sure does flatten the 'smaller-fellahs' hey....?

camodog said:
I wondered if you had to inform 'an authority' just which area you were hunting and if thete was some kind of restrictions imposed on number of hunters 'on the ground' so to speak.
Click to expand...

No we self regulate as in first in first served. If a hunter heads into a creek system and there is another party there he simply heads off to another system to hunt.
The shot fired that I mentioned was when I took the mate to the neighbours joint 10 k`s down the road,we were two k`s up the back from the farm house,well up the back and there is a track well above the bush that someone was hunting off. We were pretty safe as its a two K **** of a steep walk into where we were at the time but in that thin mountain the shot noise sounds "oh so close" I mentioned 1/2 a k away but that was an uneducated 'guess'

The calibre flattens the bigger ones also Loki...with great authority mate.
I have to say that it was made by one of the great Pommy names that sadly was swallowed up in the modern times...a Parker Hale formerly a .270 with LW barrel,B+C stock etc That, mind you shoots as well as any effn overpriced Sako/Blaser/custom rifle made for five times the price.

Hilar? Schmylar! I call it a shoulder shot ..DRT!
J