Question for those in the know, has anyone on here ever bent a barrel or later found out it was bent? How do you tell (other than looking at or down it, unloaded of course, but it would have to be way off for you to see that with the naked eye!)

Asking as a former colleague once tipped over with a rifle on their back, never saw it happen but I was later handed the rifle (with the above unbeknownst to me!) and told to shoot a hind.

Shot was way off and just clipped the poor beast, thankfully we were able to follow up. At the time I was very sure of my shot but the usual 'it was spot on when I last used it' line was offered when I asked when the zero was last verified.

In a later conversation I became aware of said incident and was not surprised when the rifle was condemned by a gunsmith during annual inspections.

Supporter
As an aside I think it was "the real gunsmith" that had a youtube episode about straightening bent barrels the old fashioned way. Very interesting.

Supporter
I bought a Taurus Long Barrel Revolver a couple of years ago (tragic I know).

It was brand new. Off I went to Bisley and could not hit a cow's arse with a banjo.

Despising myself, I swallowed my pride and took it into Fulton's for a "once over". The chap in there looked down the barrel and said "Banana".

I looked down the barrel and it was indeed bent slightly up.

Returned it to the RFD and he sent out a replacement - so yes, it does happen.

As for bent barrels, they are indeed bent to be straight manually by very experienced people in the factory when new.

However, I doubt that your mate‘s barrel was bent on the fall. The very much much more likely case is that either the scope mount and/or the scope itself were damaged or at least has lost its zero.

Supporter
Voila - the Krummlauf - as approved by Kwis and tree huggers everywhere! I don’t suppose long for weight non-lead bullets would perform very well either….. 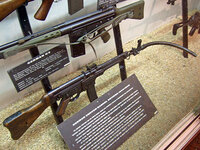 Supporter
Years ago I was shooting at WLS in west London. The instructor invited me to shoot his seemingly mint .308. It was very accurate at 100M! He then went on to explain that he had bought it for something like £40 [IIRC] from a rather hapless chap.

New to the first owner, the rifle had not fared well when it slipped from its resting place against the bumper of his Range Rover and had its barrel pass beneath the vehicle's as he reversed.

The WLS chap showed me the before-and-after photos: a truly banana barrel to start, then made true by his hand, as I could demonstrate by that day's shooting.

The weirdest part of the story was that the WLS chap suspected it would require a sequence of ever finer jigs to properly straighten the barrel, but decided to take the gross bend out first using a pipe, the tow ball of his truck and its bumper.

To his astonishment, that hack fix looked perfect. So he fired a few shots, perfect. Sent off to proof house, came back declared perfect. If I had not seen it myself...
D

I was on exercise once at Otterburn when one of the lads jumped out the back of a bedford. He managed to get his barrel jammed between the bed and the tailgate. We untangled him after much poking and prodding (as squaddies do). He continues with the rest of the exercise and only realised his barrel was bent when he went to clean it and couldn’t get the pull through down the barrel. Tried the rods but they wouldn’t go.

Supporter
Some year ago Mrs CD ran a printing business from home. In the garage there was housed one of those huge old fashioned guillotines to slice through reams of card/paper. In order to provide the weight and inersia to do this it had large 'fly-wheel' set of to one side. I had been cleaning a lovely little Browning .22 semi-auto and had laid it temporarily across the guillotine to go and fetch something from the shed, when I heard this almighty clatter come from the garage. Mrs CD had just come out of the printing shed and 'fired-up' the guillotine letting loose the fly-wheel which caught hold of the Brownig barrel spinning the rifle round and jamming it against the cast-iron framework. Result, one banana shaped 'unroadworthy' barrel ! Out of pure curiosity I put some 'shorts' through it. Oddly enough I couldn't get anything like a consistent zero !

Twenty years ago, underkeeper and my pickup truck did very unkind things to his Brno 601 in 243win. Gunsmith and large hammer with rawhide end , holding it up to the light from the windows in his workshop,got it as good as before. You would never have known that he'd bent it.

Rhodesianjess said:
Twenty years ago, underkeeper and my pickup truck did very unkind things to his Brno 601 in 243win. Gunsmith and large hammer with rawhide end , holding it up to the light from the windows in his workshop,got it as good as before. You would never have known that he'd bent it.
Click to expand...

Wonder who would still be willing to do that?

The minute there is a problem 'new barrel' seems to be the first port of call...

Border said:
As an aside I think it was "the real gunsmith" that had a youtube episode about straightening bent barrels the old fashioned way. Very interesting.
Click to expand...

I've actually seen the said video, I belive it involved bashing the barrel over a log until it was like new. Initially I was fairly sceptical but I must admit he got the thing straight in the end.

caberslash said:
Wonder who would still be willing to do that?

The minute there is a problem 'new barrel' seems to be the first port of call...

I watched him straighten the barrel. Wooden jaws over the metal ones on a large vice. Rawhide faced hammer, probably four pounder or slightly less. Hold up to the light, squint through the barrel,bash it, squint again and so until he was happy!
Mind you,he is/was a gunsmith! Specialized in restoring weapons, including flint and percussion " Daniel Boone" American vintage and antique rifles. True craftsman.
E

I recon every barrel is a little bent. Years back I saw a video of the barrel straightener of a German rifle manufacturer. Very few people could recognise the slight bend in a new barrel. They had a machine to pressurise and straighten somewhat. Not sure, it could have been Haehnel or Heym.
edi

Barrel straightener at about 1min 15

If you look down the barrel at a line such as the edge of a window with decent light you will see a line reflecting in the barrel. As you rotate the barrel watch the line and if it gets a curve or a kink there is a bend. A sharp tap will bend it the other way. Practice for a few years with a scrap barrel first.

stand to reason that most barrels are perhaps 1 cm in diameter. Stick a 1 cm and 1 metre long metal rod and give it a good heave or blow with a hammer and it will bend. Yes barrels are made of a higher tensile steel but it will still bend if enough force is applied. And taking a tumble with a rifle is enough to bend the barrel, or bend / knock scope and barrel out of alignment.

Tip. Once you have a rifle zeroed, bore sight it again and note where the cross hairs sit on the target. You can usually find something on which to boresight the rifle after you have taken a tumble or knock and worth checking to give piece of mind. Not as good as checking zero by firing a shot, but better than not having a level of comfort.

You can tell if a barrel is bent using science.. remove bolt and look down the inside of the barrel pointing just off a strong light source and if it’s straight you will see a set of concurrent target rings from the light waves I think? If its bent the rings are uneven (wonky not parallel with each other) or touching on one side. Like badly drawn target.

I fell off a dyke and thought I’d bent the barrel turns out it was the scope knackered… I’d say nine times out of ten it’s not a bent barrel?
Last edited: Jul 26, 2021

I had a friend many years ago, that fell getting out of his tree stand/blind with his lever action 30-30 strapped across his back. Bent the barrel enough so that the sights couldn't be adjusted to be used with standard 150gr factory ammo. Rather than toss the rifle or rebarrel, I just loaded some light 110gr HP's (singly loaded) for him, and he was able to use the rifle for that hunting season, until the rifle could be repaired with a new barrel.
P

well, there was a young marine many years ago, and after a ATV ran over his weapon, he was made to carry , and present it on inspection, even though it was more of a "bundle of bits" wrapped in gaffer tape ! A kind armourer did take pity , eventually.
You must log in or register to reply here.
Share:
Facebook Twitter Reddit Pinterest Tumblr WhatsApp Email Share Link