I moved across the country earlier this year so had to give up my permission of 20 years and try to find a new one. A few months of asking about and good friend put me in touch with a farmer who claimed to have a problem he needed sorting out. I went along for a chat and was very pleasantly surprised to find a farmer who loved his Roe but believed there were just too many of them and needed some culled. My last land owner just wanted everything shot so it was nice to find a land owner of the same mindset as me.

Over the last month I have spent an evening a week sitting out just counting deer, with the bins before dusk and then with the thermal for an hour after dark. With some idea of what's about and with Google Earth diligently marked up so I didn't forget I agreed a cull plan with the farmer and last night set to work. A quick shot to check zero on the 7mm08 (which was bang on despite sitting in the local gun shop storage racks for the past 6 months) and the dog and I set off to a little spot I had earmarked where a lot of deer had been emerging from the forest edge. Dog was very over excited as he hasn't been for a walk with a gun for 6 months or so. He knew the game was on.

We sneaked down a hedgerow with maize on our left and slowly turned the corner at the bottom. Sticking out of the hedge not 30m away was a very red back half of a roe. Sticks deployed, rifle up, dog shaking but at my feet we waited for 5 minutes for it to stop browsing and back out. A very pretty little doe which to my surprise walked towards us until she was within 15 meters and then gently turned into the maize and wandered off. Fabulous start.

We settled into our spot on a bank with a good view of the little valley below us. No shot was going to be more than about 130m and I found a nice little bump I could sit on with the rifle on sticks in front of me. Now to wait. It was a stunning evening. Sun shining in my face, sitting on a bank with the dog who was anything but relaxed, scanning the field in front of us, nose in the air looking for deer. I usually spot them before him, but he often catches me out, sometimes winding them before they break cover, sometimes just catching the movement before I do. I've learnt to trust him over the years, he's not often wrong.

We didn't have to wait for long as it happened. Out pops a doe. Surely there would be a buck in tow. And yes there was. I had to look at it pretty hard as my first reaction was Whitetail as it's antlers appeared to be sticking forwards on its head rather than up. Odd for Wiltshire. Turns out it has a malformed right antler which was sticking out at 90 degrees to its head. Chest covered by the bird cover a neck was the only option and at 95m I was quite happy so down it went. Good one to shoot. Only weighed in at 13.5 kg. Obligatory 5 minutes waited and the dog was despatched to find it in the cover which took all of 30 seconds. Very happy lad.

Half way through the gralloch and another buck stepped out. He was alert and on the move so must have winded me from behind. Rifle was 10m away from me so no chance of getting to it and trying for a shot. Note to self - that was a schoolboy error. Nice strong buck so not really on tonights list anyway, but don't leave the rifle 10m down the hill when gralloching. All tidied up and back to my little hump to see what else came out.

I hadn't been there for 15 minutes and up comes another customer. A fairly small 6 pointer, nothing special and again fairly small bodied. He was on the far bank at 80m and stopped for a graze at a perfect broadside. I'm a fan of making life safe and simple whenever possible so a heart shot was taken, he staggered 5m and down in the cover. Dog despatched once again and another one recovered.

Great evening out. Another one to look forward to on Thursday evening and again next week. With any luck the cull plan will be finished by the time the partridge go down in 3 weeks and I can get onto another count to see what impact we have made. I have a funny feeling the forest we march with might be a huge Roe sump in which case there will be more to take off before the end of the season. 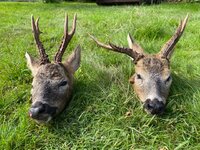 Nice write up Nigel. Glad you are back out in the field after the move. Must arrange that meet up.

I nice trip out.
D

It’s great when it all works out. Nice one

Cracking write up!! Awesome buck with the squint horn too

cheers for the nice write up

Supporter
Delighted that your move has gone well, and that you have found another piece of land over which to shoot and enjoy.

Stalker1962 said:
Delighted that your move has gone well, and that you have found another piece of land over which to shoot and enjoy.
Click to expand...

Thank you. All seems to be working out so far.

Be interesting to see the malform boiled out.