Just an update on the issues I have been having with a batch of the above.

I have posted on here several posts relating to excessively loud reports and missed foxs.

I have been using 39 BK for years standard load was 25.2 grn Re 10x, Winchester brass, Remmington 7.5 primer. COL 2.250. 22" barrel 3,550 fps. Bug hole accuracy. Recently started a new box 012054601 purchased in 03/19. Bullets now disintigrating either in barrel or on exit and Wildcat predator .204 baffle set trashed. Tried my load in brand new Tikka T3 varmit and same issues, at 20 yds two through same hole next one keyholed 4" away. Next round without moderator did same thing!

Have been contacted by another SD member who is having the same issue.

Took my rifle up to Neil McKillop who borescoped it and though barrel was OK but minor defect on land just inside crown. So had it recrowned.

Next batch of these bullets same issue.

Then a SD member kindly sent me a small batch of 39 BK which shoot OK in his rifle. Reloaded them using my standard load and got a frind to shoot them out of my rifle and hey presto bug hole 5 shot grp.

My rifle shoots well with 35 Bergers so have now come to the conclusion that I have a defective box of 39 Blitzkings.

I have sent an e mail to Sierra as has another SD member but no replies to either of them. Just got hold of another few from a 500 box which shoot bug holes so will try them.

So I have come to the conclusion that my box is somehow defective. There appears to be no visual defect on the bullets and weights and length show no drastic varriance.

Muir is there any way you could forward this post to Sierra? I can PM you my e mail address if you require it.

Supporter
Hope you get sorted bud

Or post on their social media. This usually provokes a fast reaction

Supporter
I’d be interested in the outcome too….I’ve got 3 boxes numbered sequentially 012054597 - 599 which I bought from a seller on here a few months ago. 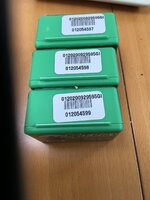 I will e mail sierra on the posted e mail and see what happens.

If you load yours and get occasional loud reports or missed targets then could well be a duff batch. I expect 30% of mine are defective.

Please can you keep me updated. Would be handy to know where your vendor purchased them.

Supporter
Hmmm…. Just checked back and it was only a single box that I bought on here (been asleep since then

)and I’m pretty sure it was the old style label. I subsequently loaded a batch using bullets from my stock of 4 old style boxes and anything fired from those has been fine.

So, I reckon these 3 new style boxes were actually bought from Norman Clark back in May 2019 on my way home from Scotland.

I haven’t looked but I’d have thought any problems would have been raised over on the US shooting forums?

Tiz a shame that we are stuck with only USA manufacturers. Their current political storm is not going away anytime soon.

Does anyone know of any manufacturers/suppliers worldwide of 204 bullets?

Since the Russians make the worlds best primers, its a shame they cant make bullets & cartridges for anything other than for an AK47 or armour piercing tank shells!

I'm now wishing I bought that Corbin press a couple of years back....

Supporter
Just to resurrect this thread..... did you ever hear back from sierra Cyres?